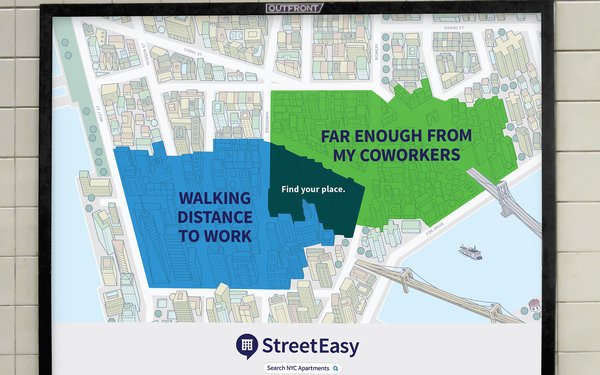 Finding the perfect apartment can be difficult. There are a certain requirements a renter might have and only a limited number of places to fulfill those requirements.

“The goal is to connect with New Yorkers by highlighting genuine aspects of life in NYC and making light of the often-humorous considerations we all incorporate into our home search in the city,” Peter Edwards, vice president of marketing and analytics for StreetEasy, tells Marketing Daily. “Our hope is NYC home shoppers will recognize themselves and their searches in each illustration.”

Timed to the start of the spring apartment-search season, the campaign is very Big Apple-specific, using qualifiers such as “I love pre-war buildings” (indicating an entire building) and “But not pre-war elevators” (for the 2nd through 7th floors). Highlighted in blue is the first floor apartment with the designation: “Find your place.” Another ad highlights an outer borough neighborhood as “Away from mom and dad” in yellow, along with “Mom and Dad’s” house in New Jersey in blue.

The effort is meant to sell New Yorkers on StreetEasy’s “vast database” of listings and NYC-centric filters. “This level of tailored experiences can’t be found on any national real estate platforms,” Edwards says.

The year-long campaign will be featured in subway stations, train cars, sidewalk kiosks and taxi tops throughout New York. The messaging for each ad was tailored for where it might appear, says Paul Caiozzo, chief creative officer and founder of Office of Baby, the agency behind the campaign.

“Because placements are concentrated on places where New Yorkers spend most of their time — on the city streets and sidewalks, in subway cars and taxis — we thought through what that meant for the creative,” Caiozzo says. “A subway ad should be well branded, visually fun, but also give someone something to read. They are stuck there, crammed between other sweaty people. This approach does both.”