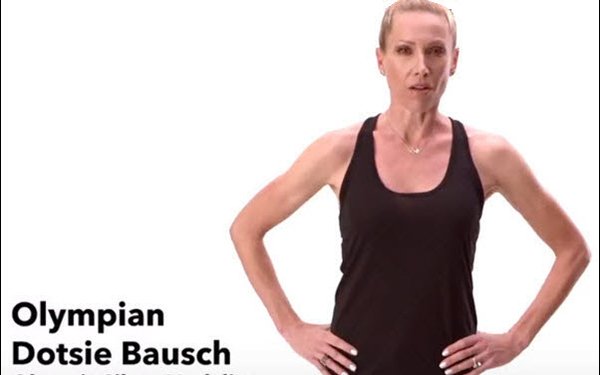 Several former Olympians extol the benefits of switching to a plant-based lifestyle in an ad that aired in six U.S. markets during the closing ceremonies of the 2018 Winter Olympics.

The 30-second ad (below), described as a PSA, aims to counter the Milk Life Olympics campaign with TV ads featuring freestyle skiing gold medalist Maddie Bowman, from the milk industry’s MilkPEP board.

The new ad anchors a campaign dubbed “#Switch4Good,” led by Dotsie Bausch, a silver medalist in the 2012 Summer Olympics and a seven-time USA Cycling National Champion.

In addition, Seba Johnson, a vegan animal rights activist who in 1988 became the first black woman to ski in the Olympics and the youngest (age 14) alpine skier in the Games’ history —declares: “I’ve never had cow’s milk, and I’m never going to.”

Milk Life’s TV and digital ads, events and other Winter Olympics campaign components, which involved 30 elite athletes in total, stressed that “nine out of 10 U.S. Olympians grew up drinking milk.”

The Switch4Good athletes assert that such messages are misleading, and seek to convey the message that you don’t have to drink cow’s milk to build the strength required for Olympic greatness.

Effect Partners and Pollution.tv created the campaign, and the ad was directed by Louis Psihoyos, who is known for directing Oscar-winning documentary “The Cove,” about dolphin hunting in Japan.

In contrast to highly produced Olympics ads, “Our goal was to simplify — let these women and men speak from the heart in a positive and authentic voice — about their commitment to a dairy-free diet and the health benefits they've personally realized by transitioning to a plant-based lifestyle,” Michael Martin, CEO and founder of Effect Partners, tells Marketing Daily.

According to Martin, no plant-based milk or other product brands were involved in backing the campaign.

“The athletes really led the way here,” he says. “They came together with a powerful idea and then secured funding from anonymous donors who are supportive of the plant-based movement overall. The donors have requested that their contributions remain private.

"Consumer interest in a plant-based lifestyle is surging,” he adds. “From recent documentaries expanding awareness to exciting new plant-based alternatives offering people more taste and quality products, we're at a true tipping point. The objective of this campaign — which, again, is led by our athletes, as opposed to any specific product or brand — is to give even more encouragement to those who are looking at exploring how this lifestyle can benefit them."

The campaign’s website describes Switch4Good’s mission as “raising awareness of the benefits of plant-based eating for all the right reasons: health, performance, sustainability and ethics… We call these ‘The Big 4.’”