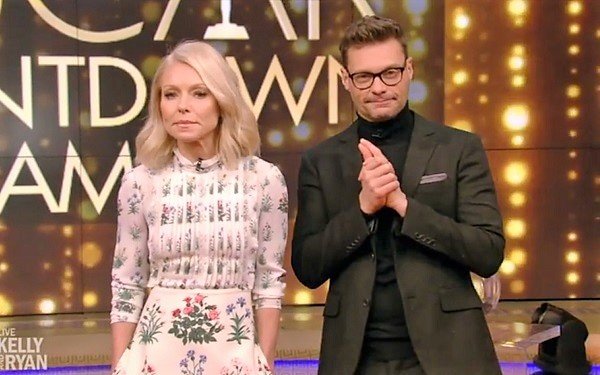 If Ryan Seacrest can survive the sex harassment charges being leveled against him with his career intact, then that will be some achievement.

It will almost qualify as a “first” in the recent annals of sex harassment. Seacrest, whose reputation was stellar and squeaky clean until very recently, has been accused of committing various behaviors that would appear to qualify as sexual harassment.

The accusations, leveled by a former stylist at E! who worked closely with Seacrest on his hair, makeup and wardrobe at the cable network, had been circulating for months.

But this past Monday, Variety published an in-depth interview with Seacrest's accuser, Suzie Hardy, that shifted the growing scandal into overdrive.

The timing could not have been worse. Seacrest is a key figure in E!'s coverage of this weekend’s Oscars -- which is like the Super Bowl for E!. And he will also be in Southern California with Kelly Ripa for “Live with Kelly and Ryan.”

In the wake of Monday's Variety story, news reports said some stars and their publicists plan to shun Seacrest on the Oscar red carpet. Well, speaking from a viewer's standpoint, that might make for some interesting television.

Also coming soon: ABC’s revival of “American Idol,” which is due to premiere March 11 with Seacrest as host -- positioning him as the only symbol of on-air continuity between this new “Idol” and the original one that made Seacrest famous on Fox.

But that’s not all. Seacrest has his hand in so many projects that it is possible to envision half of the TV business collapsing like a Jenga tower if he is removed.

In case you forgot, he is executive producer of “Keeping Up With the Kardashians” -- otherwise known as “Keeping E! Afloat.”

Meanwhile, back at ABC, his presence as co-host with Kelly Ripa on “Live” has stabilized that show. In addition, Seacrest has long been Dick Clark’s heir on ABC's high-rated New Year's Eve show from Times Square, which has dominated for years.

With so much riding on Seacrest, it is no wonder that ABC and Kelly Ripa are saying they support him. In so doing, they imply (if not state outright) that they believe Seacrest's denials of the charges leveled by his former stylist, and they do not believe her.

That stands in stark contrast to just about every other situation that has come down the sex-harassment pike over the last two years -- from Roger Ailes to Charlie Rose.

In some of the previous instances, the speed with which the accused men were cashiered was breathtaking. Charlie Rose was one. Matt Lauer and Tavis Smiley were two others. Smiley has been fighting back, however. His effort is a work in progress.

In the context of all that has gone before, ABC's support of Seacrest feels unprecedented. This is not the way it usually goes. In past cases, whether there was irrefutable evidence or just the whiff of a sexual harassment scandal, the accused party was out.

Isn't ABC worried about a female backlash or an avalanche of criticism on social media -- not only for backing Seacrest, but for not backing his accuser?

With so much on the line with Seacrest, perhaps ABC is trying to move heaven and earth -- in a public relations way -- to hang on to him until (or if) the storm passes.

It could be that Ryan Seacrest is too indispensable to dismiss. Although the likes of Charlie Rose, Matt Lauer, Roger Ailes and Bill O'Reilly had high profiles, their networks ultimately did not need them.

Maybe Seacrest is the TV-personality equivalent of a big bank or insurance company. With his involvement in both “Live with Kelly and Ryan” and “American Idol” -- two shows greatly dependent on him being there -- Ryan Seacrest just might be too big to fail.