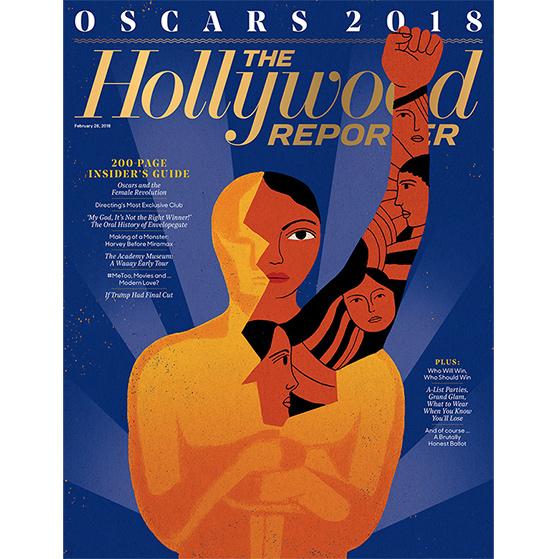 The 200-page issue is the magazine's biggest — last year’s Oscars issue was about 188, its biggest to date in 2017; the annual issue typically averages around 160 pages.

The weekly magazine usually clocks in between 80 and 110 pages.

The special issue is about half editorial and half advertising. The lifestyle coverage that lends itself to the Academy Awards opens up advertising opportunities for lifestyle and luxury brands, such as Gucci, Armani and Rolex, all have ads in the Oscars issue. Brands want to appear in the issue because “it is our most high profile of the year,” THR editorial director Matthew Belloni told Publishers Daily.

Knowing the #MeToo movement would be a big part of this year’s Oscars issue, THR’s creative director Shanti Marlar reached out to 10 prominent artists and asked them to reimagine the Oscar statuette as a woman.

Belloni said another one of his favorite features in the issue is an oral history of “Envelopegate.” The magazine spoke with about 30 people who were “key players” in the Best Picture fiasco last year, when the wrong envelope was read By Warren Beatty and “La La Land” was crowned the winner, when the actual victor was “Moonlight.”

“We spent months… putting together an oral history of how it happened, who is to blame, and what went on backstage. It is a lot of stories you have never heard before,” he said.

2017 was a big year for THR.com. U.S. unique visitors were up 43% over 2016. In November, the site hit its own all-time high at 23.5 million uniques. January 2018 was THR.com’s third-highest month of all-time, with 22.6 million comScore uniques, up 12% over January 2017. That makes The Hollywood Reporter one of the largest entertainment news sites.

Belloni attributes the growth to its efforts to focus more on breaking more news.

“We are really leaning into the news cycle. The Hollywood Reporter has always had a strong news brand, but we’ve created a newsier product both in print and online,” he said.

“We have been pretty successful in the past few years expanding the notion of what a ‘Hollywood story’ is. People in Hollywood care about a lot of things,” Belloni said. “We have a reality TV star as president, and that opens up the doors to different types of coverage.”

The #MeToo movement, which encourages women to speak out on sexual harassment in the workplace, was birthed from The New York Times’ story on Hollywood producer Harvey Weinstein and his decades of alleged assaults on women. That story opened up the floodgates of harassment allegations in the entertainment industry, Belloni said. “We have been aggressive about coverage.”

He noted that sexual harassment is “an incredibly difficult issue to cover. We want to give a voice to people who traditionally didn’t have a voice and a platform, but we also have to evaluate claims of people that have been accused. We have been very meticulous in our vetting; that’s what responsible outlets should be doing these days,” Belloni said.

Belloni replaced Janice Min last year, who took on a new role at THR’s parent company, The Hollywood Reporter-Billboard Media Group. Belloni has been at the publication since 2006.

Print subscriptions for The Hollywood Reporter have remained steady at 70,000, with a print readership of 100,000. THR’s best performing stories online originate as print features.

Content online is free for readers, but not everything in the print issue is available on the site. Would Belloni consider raising some form of a paywall — as many other publishers have opted for recently? He is “not opposed” to the idea in the long term.

Looking ahead, Belloni said video is a “big priority” for the magazine brand. THR has made deals on a number of series. Its “Close Up With The Hollywood Reporter” roundtable series is now available to stream on Hulu, for example, and production is underway on a new scripted limited series inspired by an investigative feature by senior writer Gary Baum on the Los Angeles billboard diva Angelyne.

“I’d love to get more into the documentary space and develop scripted projects based on The Hollywood Reporter magazine,” Beloni added.