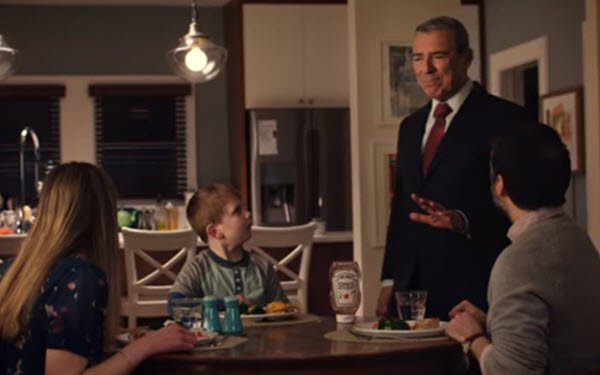 In what may be one of the most innovative “buy one, get one free” efforts ever, Heinz Ketchup has positioned the offer as a tongue-in-cheek emergency strategy, and tapped a real, retired police crisis negotiator to train desperate parents.

“According to a recent survey, about 62% of parents say they actually negotiate with their kids to get them to eat their dinner,” says Jennifer Healy, VP of marketing for Heinz. Meanwhile, American kids eat ketchup more than 3 billion times in an average year — twice as much as any other condiment or sauce, according to NPD Group’s National Eating Trends data.

Putting those two factoids together, the campaign’s premise is that running out of ketchup at dinnertime can trigger a crisis. Hence, Heinz Ketchup is coming to the rescue by giving away free “backup” bottles during the month of March — that is, a BOGO coupon available in stores, while supplies last.

In a 1:15 video (below) from the Taxi Inc. agency, a stone-faced Cambria announces that he’s “here to help, in case you find yourself in a tough spot — like you got kids to feed, and you run out of ketchup.”

He then coaches a dad and mom on how to break through a standoff with their little boy, who’s determined not to eat a bite of his chicken nuggets sans ketchup. Tactics include validating your opponent’s emotions, showing you’re ready to listen and, if all else fails, creating a mutual enemy (dad blames mom for forgetting to buy the ketchup).

The brand is also offering parents a Heinz 24-hour hotline (1-844-HEINZ11) for tips on handling the most common kid demands in negotiation scenarios.

BOGO deals are more often confined to FSIs and coupon sites than backed by a campaign including an agency-produced video, social media and PR — a sign that Heinz is pulling out the stops to drive unit volumes and trial, and/or rekindle brand loyalty among consumers.

Although its bottom line has benefitted from cost cutting and the new corporate tax break, Kraft Heinz has been struggling to grow sales, even as competitors like Mondelez have made some headway in the battle to get fresh-oriented consumers to buy packaged foods.

While Kraft Heinz has reported that products including Kraft Macaroni & Cheese, Lunchables and Capri Sun have seen positive sales trends, ketchup has not been noted as among the bright spots.

In the U.K., Heinz Ketchup’s unit sales fell by 13.2% in 2016, according to stats cited in The Grocer last August. “The famous brand has suffered a double whammy, with younger consumers moving to alternatives such as peri peri, while fans of the red stuff are saving money by buying supermarket own-label versions,” summed up The Daily Mail, adding that supermarket unit sales for the ketchup category as a whole were down just 2.7% (about 6 million bottles) for the year.