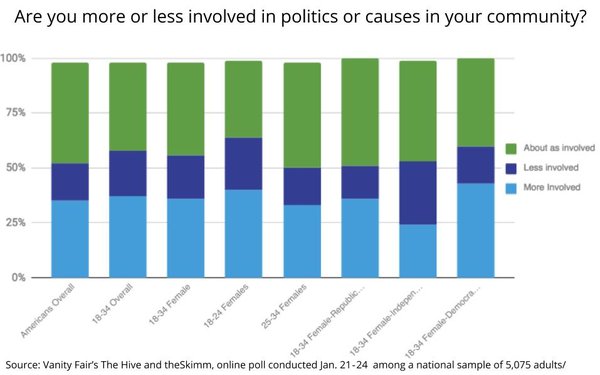 A year after Donald J. Trump was inaugurated as President of the United States, there’s a new spirit of political activism among Americans nationwide. It manifested first in the Women’s March on Washington, D.C. and other major cities in January 2017, and it grew even bigger January 2018.

According to a new nationwide poll conducted as part of a collaboration between Vanity Fair’s “The Hive,” and theSkimm, the spirit of activism is broad-based and could lead to other grassroots efforts.

Overall, twice as many Americans (35%) says they are more politically active than those who says they are less (17%). Among younger Americans, women, and Millennial women in particular, levels of activism are even higher.

How those attitudes will translate into activity remains to be seen, but if the Women’s Marches are any indication, it could be a sustainable movement. Either way, “The Hive” and theSkimm plan to continue monitoring the situation via similar polls surrounding the midterms this year.