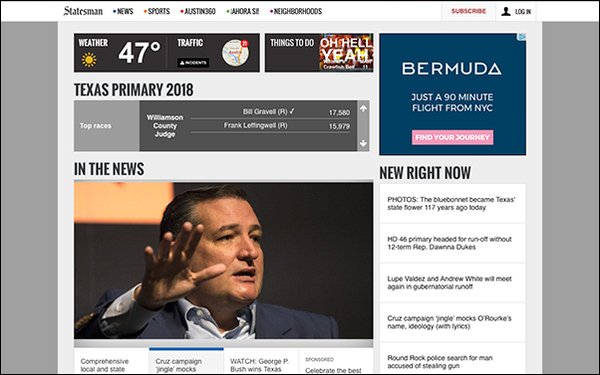 GateHouse Media has acquired the Austin American-Statesman from Cox Enterprises for $47.5 million.

The deal is expected to close April 2.

Digital offerings, such as Austin360, 512tech and Hookem.com, are also included in the sale.

“In addition to being known for its strong and trusted journalism and having high digital engagement, the city of Austin is a very attractive market for our growing business offerings,” stated Michael E. Reed, president and CEO of publicly traded New Media Investment Group, the parent of GateHouse Media.

Jason Taylor, president of the western U.S. publishing operations for GateHouse, told the Statesman that the company sees a number of opportunities for growing revenue in the Austin market, including increasing revenue from video, events and promotions, and “additional enhancements” to local advertising solutions.

Cox Enterprises, which has owned the Statesman for over 40 years, put the newspaper up for sale last October, along with The Palm Beach Post and Palm Beach Daily News.

"We have made the decision that we will be better equipped to operate our newspapers in Atlanta and Ohio, where we have the integrated opportunity with our TV and radio operations," Cox Media Group president Kim Guthrie stated at the time.

Yesterday, Cox announced the shut down of conservative site Rare.us at the end of this month.

The Statesman, with its daily circulation of 85,000 and digital subscriptions of 16,786, will be one of GateHouse’s largest newspapers.

GateHouse also operates seven daily publications, eight weeklies and nine shoppers in Texas. The company’s Center for News and Design is located in Austin and employs more than 240 designers and editors.