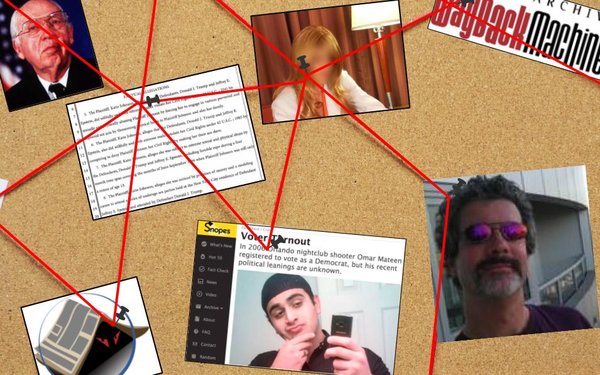 "We'll know our disinformation program is complete when everything the American public believes is false.”
— William Casey, CIA director, February 1981

“Quis custodiet ipsos custodes?” or “Who watches the watchmen?” has been a recurring theme of democratic society for millennia, since first noted in Latin by the Roman poet Juvenal in the second century A.D.

It’s a timeless concern. The most recent narrative conceit to resonate with the public has been “Watchmen,” the comic book by Alan Moore and Dave Gibbons that concerns superheroes and who oversees them, should they go wrong.

But there are no superheroes in real life, and the best we’ve got for watchmen in the war on so-called “fake news” is Snopes. People still seem to believe in Snopes. I have no idea why.

Snopes seems to be the last ace in the hole for the “Official Story,” after the shady business of sussing out fake news was repeatedly exposed as fake news itself. There have been repeated attempts to develop suspect hit lists from anonymous organizations like PropOrNot (remember them?), reportedly tied to Interpreter magazine and Ukrainian intelligence.

PropOrNot was the most high-profile of these front groups for group-think journalism. I won’t honor others’ SEO by naming them, but you know they’ve bubbled up and popped in the past year-plus as the ulterior motives of their usually unnamed sponsors are gradually exposed.

It means few know where to go for Truth, since they don’t trust the Truthers. But one place that everybody, even Facebook, seems to agree is trustworthy is Snopes.

It’s frustrating, because Snopes is a joke.

It has opted out of archive.com and The Wayback Machine, so you can’t track changes they have made over time. They don’t allow comments, even heavily moderated ones, that can add to or amend the site’s narrative. They kowtow to Monsanto; inexplicably refuse to acknowledge bad Democrats; employ writers with known ideological bias; they’ve got a crazed collection of 9/11 “Official Story” rationales: Stock Puts,bin Laden family flights, the 28 pages.

If you do a (non-Google) search, the claims against Snopes will reveal many other examples.

And while I’ve always considered it unfair ground to mention a person’s private life when being critical of their business practices and ethics, the divorce of the husband/wife team who once ran Snopes together is worth sharing for the claims of embezzling from the business, not the salacious material.

A separate lawsuit for the ownership of Snopes in the wake of the divorce continues apace, with no updates since August.

One Snopes story worth noting is determining whether the man who ostensibly leads the country might actually be a teen rapist.

I still see posts and comments on Facebook, Twitter and LInkedIn referring to the strange and sickening case of “Katie Johnson,” a pseudonym for a young woman who claimed to have been repeatedly raped at 13 by Donald Trump and the convicted pedophile billionaire Jeffrey Epstein.

At the time, the case was very much on my radar, what with #Pizzagate gossip climaxing and the unsavory history of politicians and pedophiliac blackmail in D.C. and the Pentagon. Plus, there was Epstein, a proven sex criminal, whose nearly-scot-free sentencing for crimes that could easily have earned him life imprisonment, already showed a knack for fiends in high places.

Thus, the accusations against Trump did not seem entirely unfathomable. What better puppet in the White House than an eminently blackmailable narcissist? There were enough threads to suggest further investigation was warranted.

Fortunately, The Guardian did the deserving investigation, and discovered it was all a scam — “orchestrated by an eccentric anti-Trump campaigner with a record of making outlandish claims about celebrities … a former producer on the Jerry Springer TV show, associated in the past with a range of disputed claims involving the likes of O.J. Simpson and Kurt Cobain….

".....a publicist calling himself “Al Taylor” attempted to sell a videotape of [the victim] related her allegations for $1m. It linked Taylor through a variety of means, including shared email addresses and phone numbers to Norm Lubow…..

"When the Guardian quizzed 'Al Taylor' about his true identity, the publicist replied: 'Just be warned, we’ll sue you if we don’t like what you write. We’ll sue your ass, own your ass and own your newspaper’s ass as well, punk.' ”

No surprise, after this story ran, that the case was dropped, days before the election. Almost no one followed up on the Guardian’s reporting, and rumors of Trump’s criminal deviance remain gossip to this day.

This is relevant, because I have twice sent emails to Snopes with links to the Guardian story, asking them to update their incomplete and noncommittal post. If the site is truly about getting to the truth, wouldn’t it be healthy to dispel rumors that the president is a pedophile?

Both my emails have gotten the same generic, automated reply, which basically translates to: “Thank you citizen, but we know better.”

But I don’t think they do. Allowing questions to float about the most despicable of crimes against Trump when they are demonstrably wrong and can be cited as such helps buttress his support with the people who claim the media is biased against him.

Plus, it distracts the Trump Derangement Syndrome crew from the legitimate critics who are trying to make credible arguments against his administration.