Lifetime Value (Or Any Part Of It)

It seems like only yesterday that we launched this blog, but it’s actually been 1,751 days.

The way this blog was originally conceived, it was supposed to be about time as media.

I’ve spent a lot of time thinking about that. Especially lately.

One reason is I’ve become extra cognizant of how precious it is because I recently lost someone very close to me -- my mother. And no matter how prepared you are for that kind of eventuality, there is nothing that reinforces how precious time is more than running out of it. In this case, running out of the time you have to experience someone you love. It sucks. But it is the ephemeral nature of time that is also what makes it so valuable to us.

Unlike most other things we treat as valuable -- money and possessions -- we all only get so much time. We can optimize the amount of it by living healthier, and through sophisticated medical care, and eventually though the kind of technology transhumanists believe will someday make our bodies and minds relatively immortal.

If you’re a conventional humanist like me, you probably don’t spent a lot of time thinking about that latter scenario. You probably think about the value of the time you have and how you can make the most of it.

About the time we launched this blog, I programmed an app to begin counting down how much of it I actually had. I based it on actuarial averages calculated by the Social Security Administration and the Census Bureau to determine when I would run out of it, and then I created this reverse countdown clock so I could see my supply of it expiring, quite literally in “real time.”

I did it for several reasons, mostly because I wanted a device that would remind me how precious my time is and to motivate me to make the most of it. I also did it because I was becoming increasingly cognizant of how ad technology was beginning to trade people’s time in new, algorithmically-powered ways that might be optimizing time for the people who buy and sell it, but not necessarily for the people who live it.

Five years after programming that, I am more convinced of that now than ever. I don’t know if I’ll have enough time to realize my own personal vision for empowering people to make the most of their own time, because, along the way I’ve learned how much time actually gets wasted in our industry too. And how hard it is to change that.

According to my "countdown clock,' I’ve got 18,119 days or so to accomplish my mission or inspire others to do so.

Why is this explicitly relevant to people in our industry? Aside from being people who exist in time, time is the most important metric to benchmark what they do.

They often use other proxies as their “KPIs,” but whether it is money, impressions, “engagements,” “completions,” “conversions,” lifts, sales, etc., they all, in some form or another, back into the most common denominator of time spent between brands and consumers that may or may not want them in their lives.

What’s the lifetime value of that? 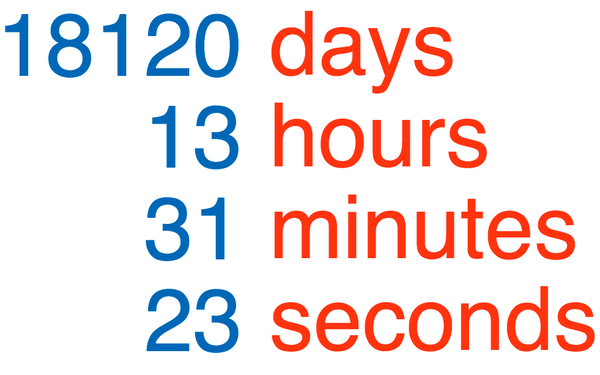 2 comments about "Lifetime Value (Or Any Part Of It)".
Check to receive email when comments are posted.
Read more comments >
Next story loading