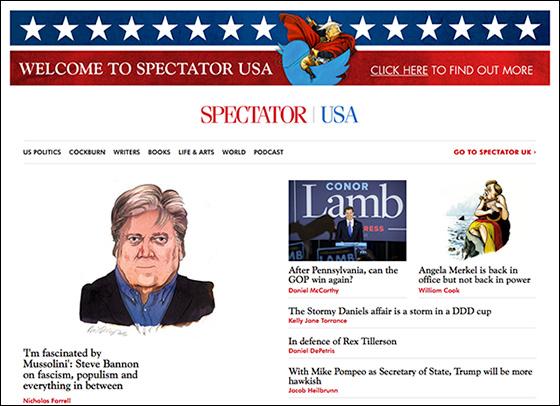 The 190-year-old weekly British magazine The Spectator is launching a site for U.S. audiences, promising "not to be crazily for or crazily against" Trump, "at a time when the 45th president often appears to have made the world go mad."

Spectator USA will cover politics, culture and life in America, as well as share “the best articles" on world affairs from the conservative-leaning British Spectator, according to an introductory post on the new site, and will be "pro-America and pro-Americans."

"There is a genuine opportunity for us to reach into America," Freddy Gray, USA editor and deputy editor of The Spectator, told Press Gazette. “The idea is it’s a U.S. site, which will do not just US content but also present the British Spectator to a US audience.”

Spectator USA will be run from the magazine's London office, but has brought on board American writers for the site, such as Jacob Heilbrunn, Helen Andrews, Daniel McCarthy, Dominic Green and Kelly Jane Torrance.

“The magazine will continue to discover and promote literary talent,” the post added.

Spectator USA is also introducing a new blog called "Cockburn" — the ck is silent, the post noted - a “cousin” to "Steerpike" in Britain that will "indulge in mischief, mayhem and gossip” going on in Washington, D.C.

There are no signs of a paywall or print magazine yet for American readers, but the Spectator in the UK has both.