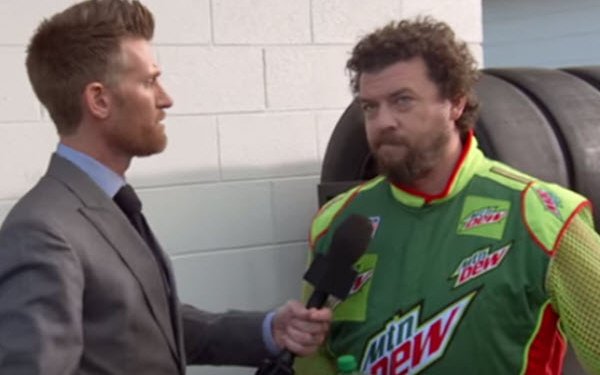 Mountain Dew’s “Dewey Ryder” is back, and more clueless than ever.

The humorous character, played by actor/comedian Danny McBride, was introduced last October, as Dale Earnhardt Jr. was retiring from NASCAR racing and his nearly decade-long stint as the soda brand’s spokesman.

Played by McBride, the irrepressibly egotistical Dewey desperately strives to disguise his all-too-obvious ignorance of racing and equipment with sheer bravado.

In the initial long video of the campaign, from BBDO, Ryder preened as he presented himself to Earnhardt as the racer's Mtn Dew “endorsementing” replacement. Ryder is dressed in a racing suit featuring shorts and sleeves made out of ladies net stockings, to keep him from getting “super sweaty.” When Earnhardt points out the suit’s lack of fire protection, Ryder proclaims, “Who’s catching on fire? Not me.”

Today, the PepsiCo brand is unveiling new Ryder creative for the 2018 racing season, starting with a long video (below) on YouTube and digital channels.

This time, Ryder proudly presents his Mtn Dew car — the one he plans to drive in his very first NASCAR race — to the race judges, who inform him that modifications like a mini-fridge, nitrous tanks and a feathery charm dangling off the rearview mirror are not going to pass muster.

The video also features a phone conversation with Earnhardt and an interview with ESPN personality Marty Smith.

The campaign’s 30- and 60-second video versions will make their broadcast debut on NASCAR TV during the March 25 race at Virginia’s Martinsville Speedway, as well as on the brand’s social channels. The TV spots will run through July, on networks including AMC, ESPN, Fox and MTV.

Teasers for the new commercial aired during the Daytona 500 on February 18.

“We’ve been extremely pleased with the way the racing community has embraced Dewey since we first introduced him last fall,” Mtn Dew senior manager, marketing, Stephanie Danzi, tells Marketing Daily, noting that some have even called for the character to have his own TV series. “We’ve been equally impressed with the way this has resonated outside of the racing world with Dew fans and people who just love to be entertained.”

The “multi-dimensional” character “captures Dew’s bold brand personality” and provides the brand with “creative space to engage with Dew Nation in a fun, unique and entertaining way,” she adds. “We’re excited to roll out the next phase of Dewey Ryder.”

Vayner is handling social media content, Golin is handling PR, and OMD is coordinating media buys for the spot.