Fake News, The Good Kind: No Joking (Okay, Some Joking) 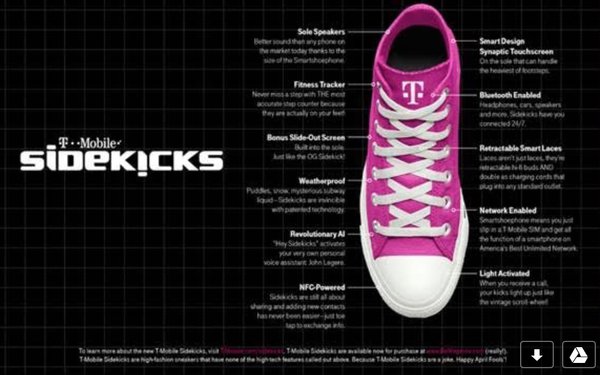 Those of us in the brand marketing news business brace ourselves every year for the inevitable deluge of April Fool’s Day-inspired “news.”

This year, marketers seem to be grasping that tricking the media is not in their best interest and are being up front that their efforts are spoofs. There seem to be more offerings than ever before.

T-Mobile might have gone the furthest in creating not just a marketing effort, but the appearance of an actual product. The company announced Friday that it is releasing the world’s first Smartshoephone: T-Mobile Sidekicks. The high-top sneaker includes a built-in phone with features including a slide-out screen built into the sole and retractable smart laces which include hi-fi buds and double as charging cords that plug into any standard outlet.

A 1:45-minute video on YouTube and social media shows off the “features” of the shoes, including toe tap contact share which is just like it sounds — users tap toes to sync their contact data into each others phones.  A 4:23-minute video features T-Mobile Chief Executive Officer John Legere in what appears to be a TSN infomercial for the product. Legere, who clearly is embracing the spoof completely, is also featured as the phone’s “no-BS personal voice assistant. Simply say 'Hey Sidekicks' and ask about anything from traffic to the best slow cooker recipes.” The videos were created by Vossler.

Because everyone loves good obstacle course race, Tough Mudder is launching its “most adorable” event series. “Baby Puppy Mudder” is a mini-obstacle challenge designed to entertain adventure-seeking babies and their four-legged furry companions who “pawsitively” enjoy getting a little dirty. The event is being launched in support of the North Shore Animal League America, the world's largest no-kill animal rescue and adoption organization.

On April 1, messaging will be posted on social and online, telling consumers that Baby Puppy Mudder is not real, but what is “fur-real” is the fact that all the puppies in the video do need a home and are available for adoption. We’re totally having fun with it and hoping consumers will get a good laugh and realize it’s all for a great cause in the end. That messaging will include links to the North Shore Animal League America with information on how to adopt one of the pups.

Lexus and 23andMe are partnering for a prank that might be welcomed by weary car buyers.  The two companies are announcing the long-awaited answer to perfect vehicle customization – Genetic Select. With a quick saliva sample analyzed by 23andMe, Genetic Select tailors the Lexus vehicle to exact specifications based on the customer’s DNA. This revolutionary new car-buying experience is being promoted via 1:41-minute video from Team One and on a microsite. A 30-second cutdown will air during Saturday Night Live and Sunday on Comedy Central.

The Genetic Select appointment takes about 10 minutes and doesn’t involve a single signature or question. Lexus’ service staff will collect a saliva sample and send it off to 23andMe for sequence testing. Within 48 hours, the perfect vehicle will arrive at the customer’s doorstep. The driver won’t even need a key to operate it—the revolutionary new saliva-powered start-system operates via a DNA ignition sensor on the steering wheel. Just lick and drive. Customers can make their appointments at their local Lexus dealerships starting April 1.

CarMax pranked its customers on its website and Twitter feed. The used car retailer claimed to have surveyed 500 cats and kittens to find out which features they most wanted in a vehicle. Fish-scented air freshener, a cardboard box and "more things on a string," were among the findings.

Food, Beverage And Restaurants Get In On The Fun

Chuck E. Cheese’s is celebrating its brand with a playful prank that dispels popular belief and recent media reports that it is getting rid of its famed animatronics. After an announcement that the brand was removing animatronics in a few of its stores spread like wildfire, there was a public outcry to keep Chuck E. Cheese, Mr. Munch, Helen Henny, Jasper T. Jowls and Pasqually around. The truth is they aren’t going anywhere anytime soon (except for in a few remodeled locations where it was necessary). So, to poke fun at the “fake news” the brand is announcing Munch’s Make Believe Band’s Farewell Tour by distributing concert posters nationwide as well as seeding it to media and influencers. The theme restaurant also shared Farewell Tour content on social teasing the opportunity to see the cherished, childhood-favorite band for one last time.

On April Fool’s Day the company will let everyone in on the joke by sharing that although the farewell tour may not actually be visiting a city near you this year, you can rest easy knowing Mr. Munch and his band and Chuck E. himself will be making music in your local Chuck E. Cheese’s for years to come. And as a thank you for rocking out with them for all these years, the brand will offer a free download of their latest album.

Other efforts are a little more obvious. Hpnotiq, the liqueur brand known for its signature electric blue hue and original flavor, is releasing a timely April Fool’s prank in response to Twitter’s recent ban of cryptocurrency-related ads. Capitalizing on the digital gold rush, Hpnotiq is set to launch “Hpno-Currency” in a bid to dominate the cluttered crypto market.

On April Fool’s Day, the “Hpnotiq Financial Institution” will announce its entry into crypto currency with an exclusive headline on the leading business publication, Business.Biz. Following the headline announcement, Hpnotiq will release the currency on the @Hpnotiq social handles.

The brand has created a commercial that will be shared on all of Hpnotiq’s social channels (Instagram, Twitter, Facebook, etc.). The later posts will simply have the hashtag #AprilFools to let consumers know it’s a joke.

It was supposedly inspired by an Instagram comment about CEO and founder Dave Asprey’s chapped lips, the lip treatment is designed to deliver unparalleled moisture, a long-lasting boost of energy, and increased mitochondrial function with just one application. The balm will be available for purchase beginning April 1 at 12:01 a.m. online and in the beauty aisle of specialty grocers nationwide, retailing for $2.88 per tube.

For those interested in a DIY version, Dave Asprey has created a 1:25-minute video that breaks it down the step-by-step. Bulletproof is currently promoting on social and on Sunday, Dave Asprey will share on his social channels that it’s an April Fool’s joke.

Sodastream sparking water has released a 95-second video featuring Shahs of Sunset reality star, Reza Farahan, and a cameo appearance by Thor Bjornsson, aka The Mountain. SodaStream’s parody presents its innovation, SodaSoak, in an infomercial style video. The presumed add-on installation enables consumers to carbonate their bath and can be “purchased” at BedBathandBeyond.com or GetSodaSoak.com, at “an exceptional 98% discount rate.”

It’s not just the U.S. that has fun with April Fool’s Day. Burger King also got in the fun. hiring Buzzman to create a 1:11-minute video promoting it’s “new” Whopper Easy Order that can be installed in consumers homes in Belgium and is “more fun” than simply ordering via an app. A consumer is shown using his feet to order on the touchscreen.

Even Service Companies Have A Funny Bone

CoolSculpting, the non-invasive fat-reduction procedure, is getting in on the fun with a spot “Moose Spa” that shows a funny (and fictitious!) method to lose stubborn fat – a moose tapping away at a person’s belly fat in the middle of a tranquil forest. The Moose Spa ad will appear on CBS, Discovery ID, Hallmark, HGTV, TLC, Fox News, TV Land and will include a microsite for consumers to learn more On April 2, CoolSculpting will launch the real ad which shows Moose Spa as the “not cool” fictitious method and shows CoolSculpting as the “cool” method to freeze away stubborn fat.

The L.A. Wine Project is getting in on the action with the launch of Blasé — the world’s first “rosé of Indifference” which the company describes as “a stultifying blend of rosé and activated charcoal to soothe your troubled soul.” Blasé is a totally new kind of wine because it’s made in a totally new way. “We start with grapes that have seen it all: drought, industrial pesticides, mechanical harvesting. Grapes that truly don’t have AF left to give, then we blend them with our tranquil-farmed, silent-harvested, scorched-black activated charcoal.. Once the infusion is complete, we just let them chill together until they develop a sort of immutable amenability.”

But how does it taste, you ask? Blasé tastes like all the rosés that have ever existed … experienced at once. “FOMO-killing aromas of everything-beautiful-in-the-world enfold an unflappable serenity that’s not trying to be anything it isn't. A truly powerful elixir, Blasé leaves you feeling like there’s nothing left to do but enjoy the spoils of your hard-won existence.”

Finally, even PR companies are getting in on the fun. According to the fifth Allison+ Partners’ Influence Impact Report, the main purchase drivers of our society’s next group of influential verticals include reading just one more book before bedtime, immediate air tight swaddles and, in the case of our canine respondents, avoidance of neuter surgery.

These results come as the results of a first-of-its-kind survey of 20,000 U.S. babies and toddlers, 10,000 dogs and 5,000 yet-to-be-born consumers, leveraging advanced proprietary technology to translate their barks and goo-goo-ga-gas into quantifiable data. Results of the study include identification of key purchase decision drivers, core product / brand categories that they are likely to purchase and spirit animals for each of the three influencer personas.