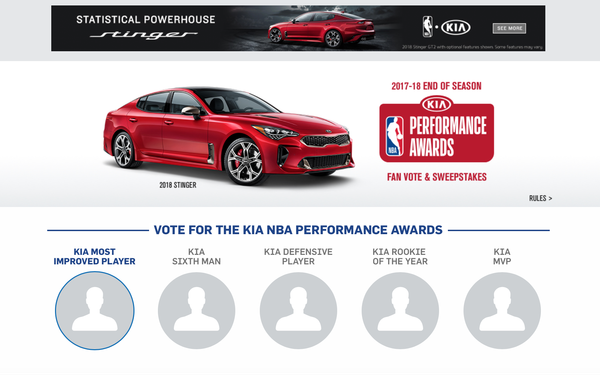 It’s that time of the year when sports fans have several options to choose from, and Kia is counting on NBA fans to stay engaged with the brand via a long-running promotion.

Since 2010, fans have been able to vote for the Kia NBA MVP Award. Starting today, Kia’s fan voting program on NBA.com/KiaFanVote and Twitter has expanded to include all the end of season Kia NBA Performance Awards: Kia NBA Most Improved Player, Kia NBA Sixth Man of the Year, Kia NBA Defensive Player of the Year and Kia NBA Rookie of the Year.

Kia is the official automotive partner of the NBA and also has partnered with 11 individual teams, including the Chicago Bulls, Miami Heat andNew York Knicks. The automaker has a dedicated microsite with all of its NBA promotions, including The Race to the Kia MVP ladder, which takes a weekly look at the game's top MVP candidates.

Voting on NBA.com/KiaFanVote and Twitter begins today and closes on April 13 at 12 a.m. ET. Fans can vote once per day from April 2-13 on NBA.com and Twitter. Fans who vote on NBA.com and via Twitter are eligible for the Kia NBA Performance Awards Sweepstakes for a chance to win a trip to an NBA Finals game.

The collective fan vote results will count as one vote for each of the Kia NBA Performance Awards, and will be included when media votes are tabulated.

Additionally, the Official Automotive Partner of the NBA, will present a new Kia Stinger to the charity of choice of each of the five year-end Kia NBA Performance Award winners. It’s interesting that the brand is opting to give the hot sports car (think Steven Tyler, Super Bowl) to a charity instead of to the player outright. Perhaps the thought is players have enough prize cars already?