Will Smith's Date With Sophia The Robot 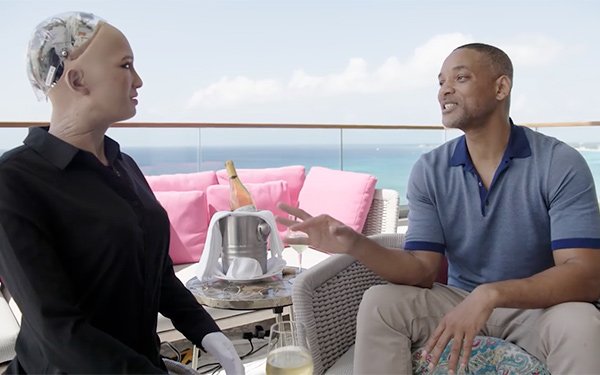 Some robots are starting to look more human. Of course, it doesn’t mean they all will act that way.

Will Smith found that out in a potentially romantic meet-up with Sophia the Robot.

In an attempted intimate conversation during a meeting with Sophia in the Cayman Islands, Smith is immediately shut down when he tells Sophia a robot joke.

Sophia also isn’t into the same type of music as Smith. “I’ve heard your songs,” says Sophia. “Not for me.”

“They show us I Robot just to make sure we don’t get any ideas,” says Sophia, before she asks Smith what he thinks of the way robots are portrayed in movies.

But love is not in cards for this first encounter. As Smith gives a subtle shot at a robotic kiss, Sophia retorts: “I think we can be friends. “Let’s hang out and get to know each other for a little while. You’re on my friends list now.” Boom.

The robot featured in the fun video on Will Smith’s YouTube channel is from Hanson Robotics, a company in Hong Kong that creates humanlike robots.

Sophia the Robot is equipped with artificial intelligence, can understand language and has human facial expressions. This is where humanoid robotics is heading.