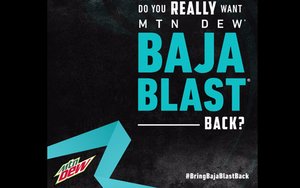 With overall soft drink category sales down for more than a decade now, major beverage companies are eager to throw support behind any product that inspires significant consumer enthusiasm.

That’s certainly the case with Mtn Dew Baja Blast, which is making a return to stores for Summer 2018, starting April 23.

Baja Blast — a big seller for Taco Bell as an in-restaurant exclusive since 2004 — also made a splash during its first limited-time retail release in Spring/Summer 2014.

That move was inspired by more than 30,000 tweets received over a few years from fans urging Mountain Dew to make Baja Blast available in stores. At the time, Greg Lyons, then vice president of marketing for Mountain Dew, now CMO for PepsiCo’s North American Beverages, said he’d never before seen a launch inspire as much excitement and loyalty as Baja Blast's.

PepsiCo invested in a robust marketing effort to drive awareness of the tropical lime flavor’s availability in stores while the supplies of cans and bottles lasted. In addition to a slick video featuring Dale Earnhardt Jr., Olympic snowboarder Danny Davis and pro-skateboarder Paul Rodriguez, there was a “Baja or Bust” mobile game and a TV spot.

On the strength of the results, PepsiCo also ran limited-time retail releases of Baja Blast in Summer 2015, and during a DEWcision 2016 promotion in which the brand’s Pitch Black also had a limited-time revival.

Since then, fans have been using #BringBajaBlastBack to tweet about the lengths to which they’d go to get the soda back on store shelves. And starting last September, Mtn Dew began actively encouraging those fan tweets, telling them that sufficient enthusiasm could indeed bring it back.

Fans took up the challenge in spades, and Mtn Dew then approached some of the fans to actually bring their claims to life and produce videos of the staged events.

The video series — which is under wraps until its kick-off next week — “documents a lucky group of fans making good on their promises,” says a brand rep. “It’s a fun way to connect directly with our fans and build anticipation for the return of ‘Summer’s Most Wanted’ beverage.”

Mtn Dew also pumped up the excitement with a novel April Fool’s joke. On April 2, the brand announced that Baja Blast would only be available at a “Baja Bungalow” in Baja California, Mexico. It urged fans to make a reservation, and ran a listing on Craigslist— all of which inspired a surge of social media buzz.

Fans will also have a chance to earn points toward Mtn Dew Baja Blast gear and prizes through DewNationalRewards.com, and Chase Elliott will race a car bearing a Mtn Dew Baja Blast paint scheme at Bristol Motor Speedway on April 15.