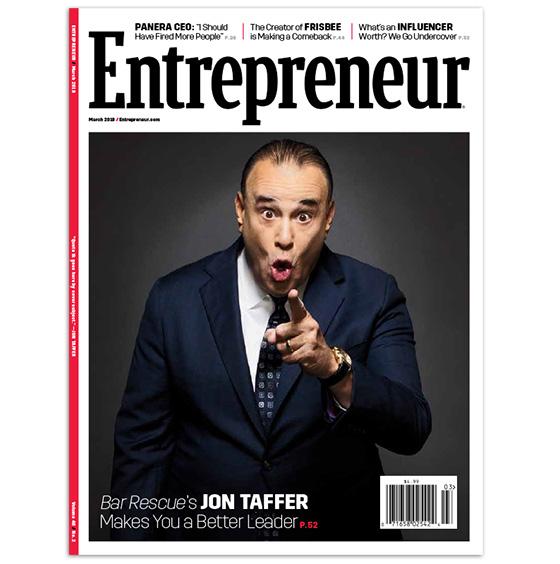 magazine says agency Huge served as its inspirational spark to fuel the magazine's design pivot towards a marketing perspective.

This exploratory project first started as an experiment on what it means to be a "user-centered publication" in today's business world. As part of this effort, Entrepreneur editor-in-chief Jason Feifer approached Huge after wondering what would happen if a marketing company wrote the cover lines.

"The cover is really a piece of marketing; its job is to sell the magazine," says Feifer. "That means the coverlines aren’t editorial copy. They’re marketing copy."

This original request was designed to serve as a one-off or a gimmick. "I wanted to come in, tell them what would be in the issue, and then have them produce marketing copy for me," he says.

Instead, Huge proposed rethinking the entire cover. "It sounded like an exciting experiment, so I said yes," says Feifer, adding that this momentum and excitement led to an entire redesign.

The first issue under this makeover diverts from the typical business magazine cover by showing celebrity bar entrepreneur Jon Taffer in a provocative pose and eschews typical cover lines alongside his image. Rather, three blurbs are positioned at the top of the March issue leaving the striking image standing almost as a still photo.

"I was chasing a thought experiment," says Feifer. "Our readers are entrepreneurs; they’re constantly looking at how their businesses operate and asking: 'Why are we doing this?' If the answer is, 'because that’s the way it’s always been done,' then that’s a bad answer—and a reason for change."

For Huge, the challenge was applying advertising principles to the publication design, says a Huge spokesperson. "Journalists and advertisers approach magazine design in very different ways," she says. Advertisers, for instance, are more straight-forward and blunt rather than cutesy and pun-filled. One blurb quotes the Pandora CEO: "I should have fired more people."

Feifer adds that this makeover wasn't sparked by declining circulation, which is steady at 3.1 million readers. Going forward, all upcoming covers will now reflect this redesign. Although the platform's website was originally updated in the fall, it will also be undergoing continued modifications.

"Huge made a point that resonated with everyone here," says Feifer. "Our readers don’t think of themselves as ordinary business people, so they don’t want an ordinary business magazine. We have license to think as differently as they do—to be entrepreneurs. That inspired us to make sure we would never be confused for our competitors."