Week In Review: Our World, Brought To You By Television 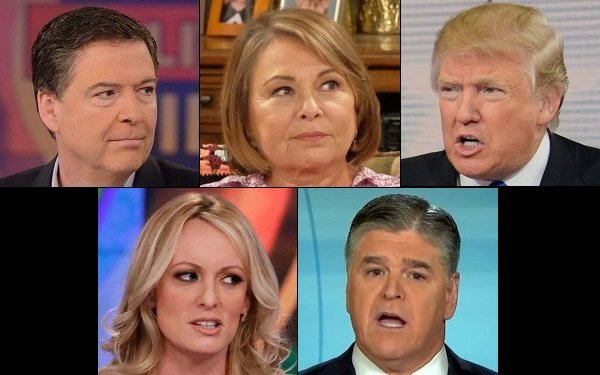 Well, that was fun!

The TV Blog rarely goes in for “Week in Review” columns, but this week truly merits a Friday recap.

The latter revelation about Fox News Channel's Sean Hannity became grist for the chattering masses, whether they were rival TV personalities on the other news channels sensing blood in the water, or just ordinary folks congregating at Starbucks to drink coffee or just to use the restroom (it never hurts to ask, right?).

The former FBI director, James Comey, got the week rolling on Sunday night when ABC gave him an hour of prime time to promote his new book about what it was like to be fired by Donald Trump. Around 9.8 million people watched, according to the overnights.

In the interview, we learned that when it is viewed up close, the skin on Trump's face has an orange tint, with a whitish ring around the eyes, according to Comey. He theorized that Trump gets fake tans and the white part around his eyes represents the outline of tanning goggles.

Comey also observed that Trump wears his ties too long, but everybody already knew that.

Comey's book, titled “A Higher Loyalty: Truth, Lies and Leadership,” was released on Tuesday. By Wednesday, Barnes and Noble was reporting that it was already the company's top-selling book in its stores and online.

Chalk one up for the power of a good old-fashioned publicity campaign in which TV played a big part.

Among other places, Comey was seen on “The View” just a day after the show welcomed another timely guest, Stormy Daniels, in what was billed as her first (and possibly only) live TV interview.

She never mentioned or elaborated on the tale she told Anderson Cooper last month on “60 Minutes” about how she playfully spanked Trump on his rear end with a rolled-up copy of his own self-named magazine.

Not asking about this was a missed opportunity for “The View.” Oh, well, no one talks about magazines anymore!

The combination of Stormy, Comey and Hannity represented a motherlode of subject matter for the news-and-talk shows, but the week's biggest story in television unfolded far away from all that.

It happened in network prime time -- Tuesday night on ABC -- as the “Roseanne” juggernaut solidified its position as network TV's most notable success story this season.

It was only the fourth episode of this relaunched old show's inaugural season (consisting of just nine episodes), but it is so welcome and so comfortable that it feels like it has been on a lot longer.

This week's episode drew a total audience of 13 million Tuesday night with a 3.4 rating in the demo (18-49). A week earlier, the total audience tally was 13.7 million -- enough to emerge as the top-rated regular series on network TV last week. “Roseanne” stands to achieve the same position this week.

While “Roseanne” started out four weeks ago with commentators and critics focusing on the title character's support of President Trump, the show has emerged as much more than that in the weeks since.

Her show succeeds because it is about something -- families, homes, everyday struggles, joys and disappointments. It is about life as it is lived by millions of Americans who feel they are underrepresented on television and by the media in general.

In its sitcom depiction of a fictional family, “Roseanne” has more to say about contemporary America for one half-hour a week than the entire gaggle of partisan blabbermouths and know-nothings on cable TV who have 100 hours a week to express themselves and say nothing.

“Roseanne” is a bona fide phenomenon, and on that basis, it is reasonable to label Roseanne Barr a genius, and one of the few in television today.