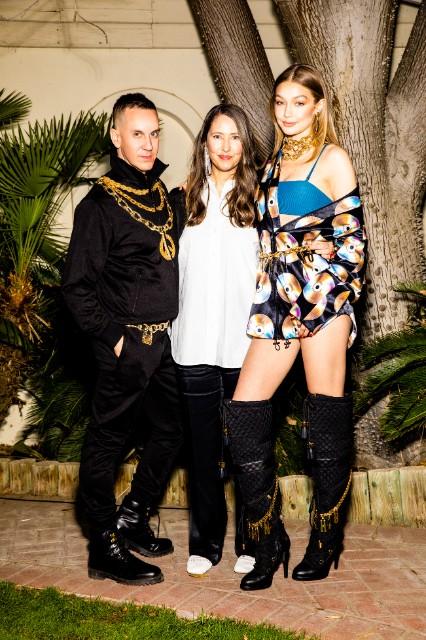 The Coachella Valley Music and Arts Festival keeps building its fashion muscle. Sure, much of the high-style impact comes from performers–and the internet can’t stop talking not just about Beyoncé’s custom Balmain costumes, but that she changed clothes five times in a two-hour set.

But because of the social-media impact of the largely Millennial audience, it has increasingly become a stage for brands, and a hunting ground for the fashion influencers who drive sales.

H&M used the event to announce its latest collaboration, with model Gigi Hadid surprising guests with the news that it would partner with Moschino for its next collaboration. Both Hadid and designer Jeremy Scott, Moschino’s creative director, wore some of the first picks from the collection at the launch party, and H&M says the Moschino [tv] H&M collection is scheduled to go on sale Nov. 8.

The clothes will feature H&M prices for the signature playfulness of Moschino, best known for items like $825 Betty Boop dresses for women or $450 flaming Sponge Bob t-shirts for men.

The Swedish fast-fashion retailer says it plans to introduce the line with a campaign that is “a radically innovative TV concept enmeshing social and traditional media to create a multi-platform takeover — a captivating new ‘zapping’ experience for the digital world.”

Adidas, one of the festival’s sponsors, is marking the occasion with the launch of the Ultra Boost Clima, a new $200 shoe made with yarns that wick away moisture, sold at a pop-up shop. Puma made a splash with Drippin’, a pool party for the latest from its Fenty X Puma line, with singer Rihanna on hand. Levi’s threw a brunch with Snoop Dog as D.J. And online fashion retailer Revolve is also building plenty of buzz, with its own mini-festival.

Beauty brands are also big here, including Urban Decay, the Sephora tent and Dior, which used the occasion for a new fragrance launch.

But style brands aren’t the only ones wooing Millennials during the two-week event. The Antarctic, HP’s air-conditioned immersive dome, is showing a 360-degree view of Flatland; Red Bull is throwing Sweat + Reset, a radical dance party with Red Bull, and BMW i, another official sponsor, has been stoking anticipation with a #roadtocoachella social media campaign. It also introduced a Coachella design for its BMW i models, created by Portugal. The Man lead singer John Gourley.

Now in its 19th year, last year’s event was again the top festival, Pollstar reports, with a gross of $114.6 million, thanks to expanding its capacity to 125,000. And this year, it sold out in less than an hour.