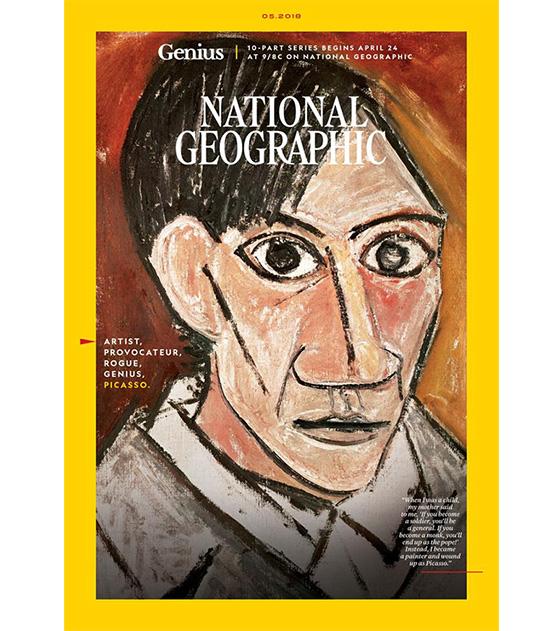 Smith stated: "This next evolution of National Geographic brings to bear the full set of tools available to the contemporary magazine. It allows us to more fully showcase the spectacular work of our photographers, reporters, and artists—and, in turn, provide an even better magazine for our readers."

The redesign retains the iconic yellow-framed cover, this month featuring a story about Picasso, but now includes several new sections, all positioned in the front of the magazine.

They include: “Proof,” a section dedicated to short photo essays that bring new perspectives to the magazine’s audience; “Embark,” an investigative section filled with ideas and opinions meant to challenge reader expectations; and “Explore,” which will include a segment called "Atlas," a story told through maps, and an essay about a single, significant photograph called "Through the Lens."

The feature well also has changes.

Rather than running four or five stories of the same length and depth of reporting, issues now feature two stories of traditional length and several shorter stories with a focus on illustrations and photos for storytelling effect. A “marquee” package will also continue to be published in each issue.

The redesign also highlights two new paper stocks, meant to allow the magazine’s photography to appear richer giving the magazine a more substantial feel to its pages, and two new fonts, Earle and Marden, named after National Geographic explorer-in-residence Sylvia Earle and Luis Marden, a pioneer in the field of color photography.