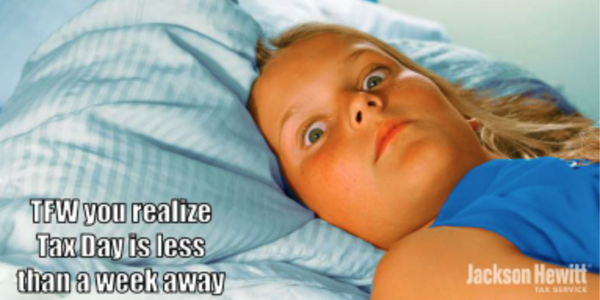 As the end of tax preparation season nears, Jackson Hewitt is having a little fun on social media.

Tax Day is April 17 this year since the regular date of April 15 fell on a weekend. And there are likely plenty of consumers waiting until the absolute last minute, since everyone loves a deadline.

Jackson Hewitt thought that some levity might ease that stress. The financial services company created a series of memes it has been posting on Twitter and on its Facebook page. Consumers have responded to the memes with comments and shares. The memes were created by DiMassimo Goldstein.

“While most social activity takes place earlier in the season, we're pleased with the number of shares and interaction around the posts in the final days before this year's deadline,” Euan Campbell, CMO of Jackson Hewitt, tells Marketing Daily. “With these memes, we wanted to bring some light humor to what can be a stressful time of year for some.”

This is the first year the company has taken this approach.

Jackson Hewitt Tax Service Inc. is the second-largest tax-preparation service in the United States (after H&R Block) and is responsible for preparing over 2 million federal, state, and local income-tax returns each year. It operates more than 6,000 franchised and company-owned locations throughout the United States, including nearly 3,000 located in Walmart stores nationwide.