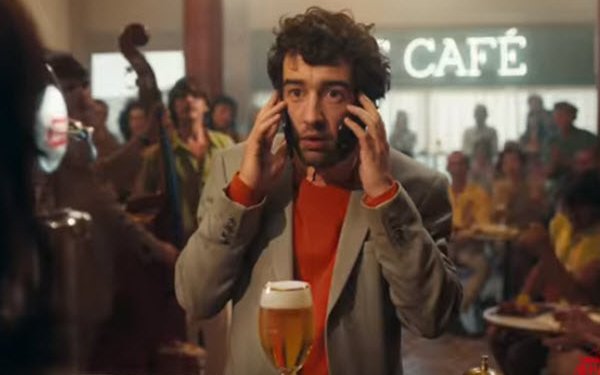 The campaign, “Joie de Bière,” launching in 19 markets around the world, is Stella Artois’ largest marketing effort to date, including its biggest TV buy thus far, according to the company.

The initial 30-second TV spot, “Les Pockets” (below) has an amusing, European vibe reminiscent of 2017’s whimsical “Dancing in a Modern Forest” ad for Stella Artois Cidre — also from the Mother agency.

The ad is set in “Le Village de Stella Artois,” a fictitious town where the residents don’t let modern distractions get in the way of enjoying life’s simple pleasures — like a foamy Stella Artois poured into one of the brand’s famed “chalices.” The 600-year-old beer is itself known as “Le Village,” and the fanciful town is meant to be an “idyllic manifestation” of its hometown of Leuven, Belgium, according to the brand.

The commercial depicts a man who’s frantically trying to juggle dual mobile phones being saved by an “invention” that’s being put to good use by joyful residents kicking up their heels at the local tavern: pockets.

“The name ‘Joie de Bière’ is of course a play on the well-known European sentiment of ‘joie de vivre,’” summed up Stella Artois Vice President Harry Lewis. “Le Villageis a place where people can take a mental escape to imagine what life would be like if you set aside modern distractions, and we’re excited to bring this concept to life as we set out on our mission to bring more joie to the world.”

The brand will host Le Village-inspired pop-up bars at U.S. food festivals, including ones hosted by Food & Wine and The Infatuation. Consumers will also have the chance to win a getaway trip to the San Diego Wine & Food Festival, by entering a Snapchat code on signage in the brand’s on- and off-premise accounts.

In addition, Stella Artois will sponsor “Don’t Rush Hours” — happy hours extended by one hour — at select bars around the country.

On the social media front, the brand will encourage consumers to express their frustrations about daily hassles, then surprise them with complimentary Drizly codes to purchase Stella Artois and Stella Artois Cidre. It will also offer digital “vignettes” that remind folks to put aside the technology and enjoy real, live time with friends and family.

Online pop-up ads will urge viewers, “Don’t click on this banner ad” — both to grab their attention and to nudge them to think about swapping some online time for some “Joie de Bière” time.

Finally, custom billboards built out of real flowers will encourage consumers to “stop and smell the beer.”