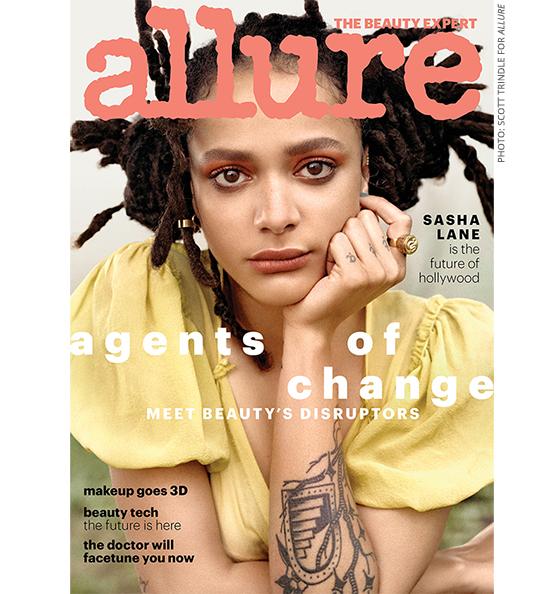 Allure is calling its May issue the “Disruptors Issue,” dedicated to the people changing the beauty industry this year.

"The beauty world is booming right now — and standards of beauty are thankfully evolving as well,” Michelle Lee, Allure's editor in chief,  told Publishers Daily. “We thought this was the perfect time to highlight some of the people, products and new technologies that are not only shaking up the $445 billion beauty industry, but redefining what beauty is altogether.

"We also pay homage to some of the innovators who were breaking the mold years before 'disruption' became part of the mainstream conversation," she adds.

Actress Sasha Lane, the lead in the 2016 film “American Honey,” graces the cover of the "Disruptors Issue." It hits newsstands April 24.

Lane, who is biracial and queer, is also in two upcoming films: "The Miseducation of Cameron Post," which will screen at the Tribeca Film Festival this month, and "Hearts Beat Loud."

Another feature of the article spotlights 12 “Beauty Disruptors” who are “reshaping how the world thinks about beauty,” according to the Condé Nast publication.

This group was chosen for their bravery when faced with “barriers, haters or self-doubt.”

In 2018, Allure is publishing seven themed issues (similar to the "Disruptors Issue") and four special guides.

Allure's January issue was a dedicated beauty guide to eyes, and in April, it published its "Beauty Guide: Skin." The other two beauty guides will be on hair and lips.