Nixon's The One: Tricky Cynthia Runs For Governor 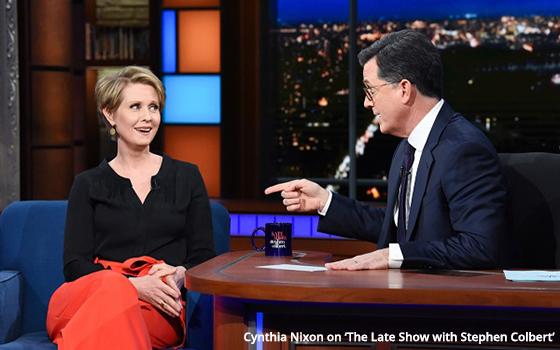 Cynthia Nixon's candidacy for governor of New York qualifies as subject matter for this TV Blog because she is best known for starring in a TV show and because she was on TV just last week, as a guest on Stephen Colbert’s “Late Show” on CBS.

Nixon announced her candidacy about four weeks ago, intending to challenge incumbent Governor Andrew Cuomo in the democratic primary next September.

The job of governor of New York is the first political office Nixon has ever sought in her entire life (she's 52). She starts her political career with a last name that she evidently feels is a liability -- Nixon.

As a result, Nixon's campaign prefers to emphasize her first name and downplay her last name or omit it altogether as in the three-word campaign slogan, "Cynthia for NY."

"I am aware of the dubious nature of my last name," said Nixon in a tone that assumed the whole world shares her particular view of Richard M. Nixon, 37th president of the United States and the only one to ever resign while in office.

"But I also have to say if I was given a choice, I would rather be the good Nixon than the bad Cuomo," Nixon said.

A few minutes later, Nixon explained to Colbert why she is running. "I'm running because I'm a lifelong New Yorker and I love this state and I just know we could do so much better!" So there!

Combing through my memories of "Sex and the City," the HBO show that made Nixon a star, I can recall no situations whatsoever in which her character, Miranda, engaged in any political activities, either as an activist or as a candidate for office.

Playing at politics on TV might not exactly qualify Nixon to run for governor of New York, but fictional experience would be better than no experience at all.

Common sense would indicate that most democratic voters in New York state are smart enough to understand that Nixon lacks the experience and know-how necessary for the job of New York state governor, given the complexities and challenges of the position.

Therefore, it is the TV Blog’s opinion that Nixon has about as much chance of unseating Governor Cuomo and the entrenched political apparatus that supports him as a snowball has in hell.

Nixon seems as if she is smart enough to know this already. One suspects Nixon is running for governor in much the same way that personalities such as comedian Pat Paulson would announce in the 1960s that they were running for President -- to get attention, have some fun, get a few laughs, get on TV and get written about.

If Nixon's campaign is unsuccessful, one bright spot would be that it could quash the political ambitions of other ego-driven candidates from the world of television, and we might be rid of TV-star candidates of any kind for the foreseeable future.

If this is the result, then I will be among the first to thank Cynthia Nixon for achieving it.