Ingraham: Advertisers Who Bailed On Her 'Gave In To The Mob' 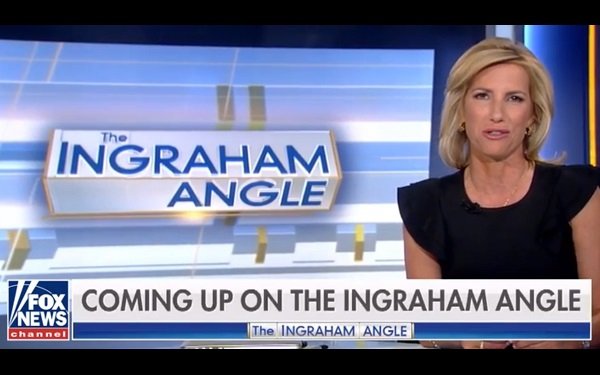 Laura Ingraham made headlines on Tuesday when Media Matters got wind of statements she made on her syndicated radio show Monday about some of the advertisers who fled her Fox News Channel talk show a few weeks ago.

The advertisers bailed on “The Ingraham Angle” at the request of David Hogg, a teenage student at Marjory Stoneman Douglas high school in Florida who became an activist in the wake of the massacre there.

Ingraham insulted him in a tweet late last month and he responded by calling for a boycott of companies that advertised on her show. True to form, at the first mention of the word “boycott, a number of them withdrew from “The Ingraham Angle.”

Ingraham had this to say about some of them on her radio show on Monday, courtesy of MediaMatters.com:

“Our ratings are up, up, up, up, up. Among 18- to-34-year-olds, our ratings, I think, are up 47% since the boycott,” she claimed about the audience figures for “The Ingraham Angle,” and in the process, sounded a little like Donald Trump when he used to call reporters and TV columnists and make imprecise, exaggerated claims about the ratings for “The Apprentice.”

Before blasting some of her now-former sponsors for caving in to “the mob,” she praised at least two advertisers who stuck with her -- My Pillow and Ace Hardware.

“All these business -- Mike Lindell, the My Pillow guy, he’s selling so many pillows!” she said, again sounding like Trump when he took it upon himself to publicize “The Apprentice.”

“Ace Hardware came back to our show. I mean, support Ace Hardware franchises across the country,” she urged her radio listeners. “Support them because they said no to the mob. All these other companies -- SlimFast, Jenny Craig -- they all gave into the mob.”

In the context of these remarks, “the mob,” according to Ingraham, consists of those who continually “demonize” conservative TV and radio personalities, educators, lecturers, authors, you name it. Ingraham used the word “demonize” more than once in the excerpt of her radio show that was posted by Media Matters.

“They can’t argue with you, so they demonize you,” she said. “OK, well, keep demonizing me. Bring it on.”

There was no hint in the excerpts Media Matters provided as to how Ingraham might feel about all of the other advertisers who quit her show -- a reported total of as many as 18, including Hulu, TripAdvisor, Wayfair, Nutrish, Expedia, Stitch Fix, Johnson & Johnson, Office Depot, Miracle Ear, Liberty Mutual, Nestle and others.

With all due respect to the My Pillow guy, his pillows may be the most comfy pillows ever made, but his commercials are seen all over the place on a number of TV channels whose commercial rates are decidedly on the cheaper side.

Still, you can hardly blame Ingraham for looking for silver linings among the clouds. If My Pillow and Ace Hardware can stick with “The Ingraham Angle,” can Miracle Ear be far behind?