Much Apu About Nothing: The Saga Continues 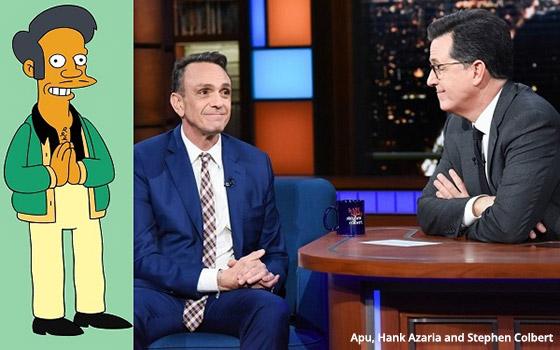 The voice of Apu has spoken, and he is exhibiting remorse and contrition in such vast quantities that you can sense he wishes sincerely to be forgiven by the protesters who have revved up their complaints recently about Apu, a cartoon character on “The Simpsons” who is a caricature of Indian-Americans.

The “voice” belongs to Hank Azaria, who has made the sounds that come out of Apu’s mouth for the entire 29-season run of “The Simpsons.” Through most of that time, nobody cared. Now they do.

The objections to Apu -- seeming to emanate mostly from a younger generation of Indian- and South Asian-Americans -- center mainly on the characteristics of his voice, which is rendered in a decidedly caricatured dialect.

To many of us, the Apu character has long been one of the best-liked characters on “The Simpsons” -- a hard-working, immigrant business owner who becomes a pillar of the Springfield community.

And while he does speak with a caricatured accent, he does not express himself in broken English. Indeed, his command of English is impeccable.

On “The Late Show with Stephen Colbert” Tuesday night on CBS, Azaria estimated that he has voiced some 30 “Simpsons” characters.

But because of the recent attention being paid to the Apu, Azaria talked about this character exclusively in an attempt to persuade the protesting multitudes that he feels their pain.

“How would you characterize the controversy, and do you understand why some Indian-American or South Asian actors are offended by that character?” Colbert asked him.

“Not just actors,” Azaria said, “but of course I understand. It has come to my attention more and more, especially over the last couple of years, that people in the south Asian community in this country have been fairly upset by the voice and characterization of Apu.”

“It was certainly not my intention,” he said. “I wanted to spread laughter and joy with this character and the idea that it has brought pain and suffering in any way, that it was used to marginalize people, it’s just upsetting, genuinely. I've given this a lot of thought … my eyes have been opened [etc.].”

The protests, he said, “sparked a lot of conversation about what to do with the character going forward,” indicating how protests of this kind can affect, and possibly undermine, creative processes.

So what are the “Simpsons” writers and producers supposed to do now? Suddenly give Apu a voice without an accent?

What Azaria says he wants is for the show to hire Indian-American or south Asian writers who can then put their stamp of approval on how the character is portrayed from now on.

“I really want to see Indian [and] south Asian writers in the room -- not in a token way but genuinely informing whatever new direction this character might take, including how it is voiced or not voiced,” said Azaria, who then volunteered to let the role go to another actor (which would likely come as a big relief to him).

While they are at it, they should look into hiring more Italian-Americans too because the Italian-American characters on “The Simpsons” -- Fat Tony, the Mafia don, and Luigi, the outrageous caricature of an Italian restaurant owner -- are no doubt raising hackles among Italian-Americans whose protests we have not yet heard for some reason.

In addition, an African-American doctor should be added to the “Simpsons” writing staff in order to ride herd on the show’s depiction of the African-American physician, Dr. Hibbert, who laughs at his patients.

In that same vein, I am sure America’s bartenders and saloon owners would appreciate it if greater attention could be paid to the characterization of Moe the bartender on “The Simpsons.” He's really a grotesque character -- and insulting to bartenders the world over.

These great ideas for enlarging and improving the “Simpsons” writing staff beg an obvious question: Where does it all end?

tv
1 comment about "Much Apu About Nothing: The Saga Continues".
Check to receive email when comments are posted.
Next story loading