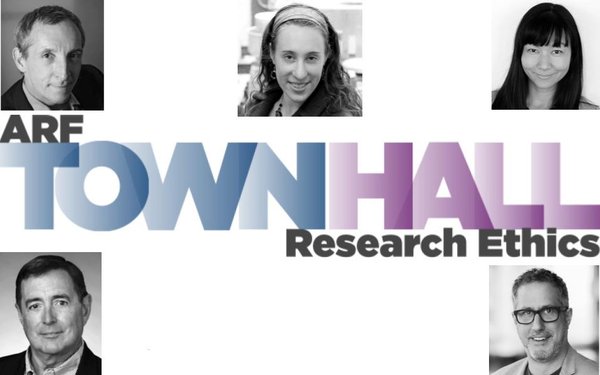 If the Advertising Research Foundation’s Town Hall on the ad industry’s code of conduct concerning data collection and consumer privacy is any indication, don’t expect a consensus anytime soon. The panel discussion could be summarized as a debate between two opposing philosophical views: One represented by Rolfe Swinton, director of data assets at Germany’s GfK, who took the progressive view on consumer’s right to data self-sovereignty, popular among Europeans; and another held by digital ad tech native Rick Bruner, who had a more  laissez-faire view that no real harm is done to consumers by using their personal data to target them with advertising.

According to Swinton, it’s not just an ethical issue, but a practical one too. “There’s been a significant erosion in people’s willingness to participate in research,” he said, citing not just bad practices by the advertising and media industry, but the expose by former intelligence contractor Edward Snowden about the U.S. government’s use of people’s data.

He cited an example of one GfK respondent who was concerned about having his home metered for fear that that third-parties might see some of his business emails, and that could cause issues with his employer.

“When you don’t have that trust, it gets harder,” Swinton said about the practical implications of privacy concerns on the marketing and media research industry.

Moderator and ARF Chief Research Officer Paul Donato noted that many of the TV and digital metering systems now tap into the household’s WiFi, giving them full access to anything being transmitted in and out.

Bruner, who is now vice chair-USA for I-COM, but has worked in ad tech at Doubleclick, Google and other places, too a decidedly more pragmatic marketplace view of the issue.

“I find this question very challenging,” he said, adding, “I represent the guy on the panel who drinks the Kool-Aid about ad tech and have a hard time finding the harm.”

“We are collecting massive amounts of data,” he said, adding, “It’s noisy. We say it’s at the identity level, that Facebook knows on every device you are on that it’s you.”

He also cited the use of ACR, or automatic content recognition technology, in most modern smart TVs and the use of it to create new research about people’s identity and behaviors by literally listening to what is happening in their homes. To date, only one manufacturer, Vizio, has run afould of the law with its use of that technology, but Bruner said, “i feels like we are out of proportion in seeing danger.”

All the panelists agreed a bigger issue is explicitly hacking that can steal people’s identity, behavior and even financial data for nefarious purposes.

But GfK’s Swinton raised an issue stakeholders in the U.S. are just beginning to come to grips with, which is what is the fair value to exchange with consumers for appropriating their data.

“How do you actually compensate people for that,” he said, citing recent estimates about the value to Facebook for monetizing its users’ data.

Bruner countered that value exchange is baked into the access to media, content and utilities of users who opt into the digital platforms that provide them with that access.

As lively as the debate was, it didn’t raise any new issues or, for that matter, any explicit guidelines the industry could adopt to improve its code of conduct concerning consumer data privacy.

The event concluded with ARF President Scott McDonald stating the foundation hoped to coalesce industry-thinking on that and anticipated having a draft of proposed guidelines or standards by the time of its audience measurement conference in June.

3 comments about "'Is Self-Regulation Possible?'".
Check to receive email when comments are posted.
Read more comments >
Next story loading