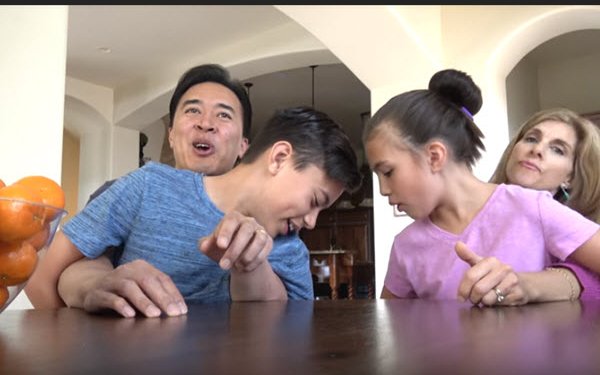 In addition, a second paid video, starring “Evan,” has pulled nearly 325,000 views in the same timeframe.

Both ads are part of Wonderful Halos’s largest-to-date digital influencer program, running through the mandarin season that ends in May.

The fruit brand is teaming with some of YouTube’s most-followed stars, as well as having its network of mom influencers offer fun ways to introduce healthy snacking into kids’ activities.

The Ryan video (below), featured on the Ryan’s Family Review YouTube channel, has the little boy playing a kids’ version of “Would you rather” with his mother. (Example: Would you rather play in the backyard on a sunny day, or would you rather just sit on the sofa the whole day?)

Ryan — a 6-year-old who pulled in $11 million with his “Ryan Toys Review” show in the 12 months ended June 1, 2017, according to Forbes — is one of YouTube’s “Most-Watched Video Creators,” pulling some 1 billion views per month.

In the Evan video, the 12-year-old, his 9-year-old sister and their parents compete in Wonderful Halos peel-off challenges, including one in which mom and dad act as the kids’ arms to do the peeling (shown above).

Evan, YouTube’s “Most Influential Video Star Among Kids and Adults,” pulls some 130 million views per month on his EvanTubeHD and EvanTube RAW channels.

For safety reasons, the last names and places of residences of big YouTube kid stars are closely guarded secrets.

The paid Ryan and Evan videos — each roughly 7 minutes long — were a collaboration with Pocket.Watch, a kids’ entertainment media brand that represents child video stars and other talent and acquires and distributes content across media channels. The company was formed a year ago with investors including CBS CEO Les Moonves, Hollywood producer Jon Landau and actor/producer Robert Downey Jr.

This partnership, according to Wonderful, reflects Smarty Pants research showing that YouTube is the most-loved brand among kids six to 12, and that, while traditional snack foods are the top-ranked brands on YouTube, Wonderful Halos are the top-ranked “naturally healthy” snack brand.
food, influencer marketing, youtube
1 comment about "Wonderful Halos Goes Viral With Kid Video Stars".
Check to receive email when comments are posted.
Next story loading