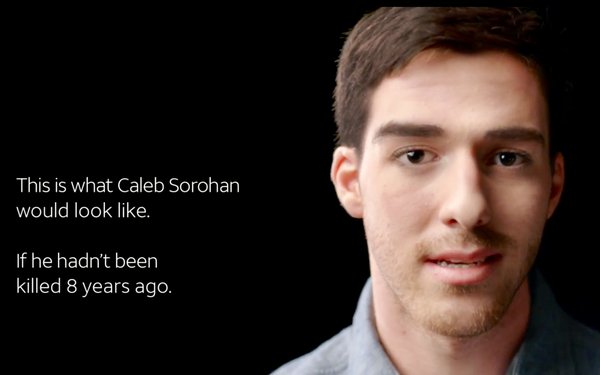 AT&T continues its aggressive “It Can Wait” campaign to stem distracted driving by going to the movies. Two new powerful 30-second videos will debut on 5,300 big screens before the nationwide premiere showings tonight of “Avengers: Infinity War,” that newest smorgasbord of Marvel comics superheroes hard at work.

In the weeks ahead, AT&T will take its don’t-text-while-driving messages to the movies again, before premiere day showings of “Solo: A Star Wars Story” on May 25 and “Jurassic World: Fallen Kingdom” on June 22.

The short videos, four in all, are under the “The Face of Distracted Driving” umbrella and try  to show the human cost of texting and otherwise paying too much attention to a cell phone.

Those theatrical features films benefit from cinematic effects and in a way so do these public service spots.

In each of the two .30 second films, AT&T uses forensic artists and a visual effects team with actors who look like what two teens killed because of texting years before might look like today. The promos integrate real footage of the teens as their dopplegangers tell the too-short stories of Caleb and Forrest’s lives, eerily narrated in first person.

“Caleb” wonders what his life would have been like had he lived beyond 18.. “Maybe I’d be married to that girl I was hanging around with in freshman year,” he says. “She’s married with a baby now. Life just goes racing forward for everyone. Except me.”  He was killed in a head-on crash when he looked down to read a text message and swerved into oncoming traffic.

“Forrest” talks about all of his grand plans but acknowledges, “Maybe I wouldn’t be doing anything. Maybe I’d still be trying to figure it out. But at least I would have had that chance.” He was riding his bike by a driver texting — to the woman sitting beside him.

Filmmaker and Oscar winner Errol Morris  put together the videos. Two other longer videos show surviving kin as they try to deal with the tragedy that took those teen boys so early in their lives.

“Going into the cinema was new to us,” AT&T assistant vice president of corporate brand marketing Ryan Luckey tells Marketing Daily. “But we wanted to be there for what we call the ‘100 deadliest days of the year,’” also known as the summer, when distracted driving has a field day.

The “It Can Wait” campaign has been around for eight years, using various tones to get its message across, and grabbing 24 million pledges from viewers to drive distraction-free. These four messages hit harder.  “This in new territory,” Luckey says. “Showing the human tragedy.”

AT&T will also place the video on YouTube and other social media. And it produced a more elaborate “immersive” virtual reality presentation showing the dangers of distracted driving that is now touring for presentations at 200 community centers, colleges and high schools.

AT&T’s interest in stemming dangerous use of cell phones should be fairly obvious.  “Of course I’m concerned as someone at this company,” he says. “But as the father of a 15-year old girl my concern goes beyond that.”