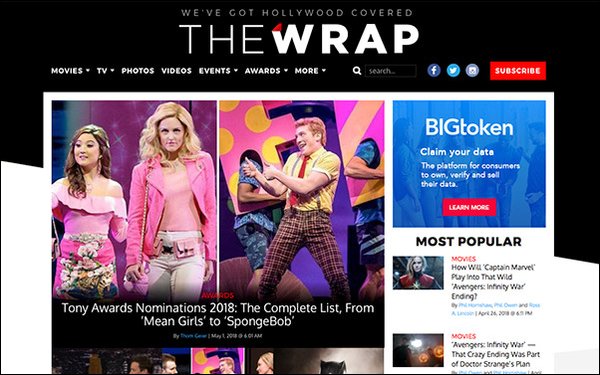 The Wrap improved its site dwell time by 33% using contextual video advertising, according to a study by Video Intelligence, a contextual video platform that creates in-stream video inventory for publishers and advertisers.

Dwell time (the length of time a visitor spends on a page) on The Wrap increased from 33 seconds to 47 seconds when it used contextual video.

The entertainment and media news platform was also able to improve user perception of its brand.

The study, which was conducted by Lumen Research, asked 200 consumers to read an article on The Wrap about the Oscars, half with contextually relevant video content and half without. The same ad for M&Ms ran before both videos.

The study revealed engagement with pre-roll advertising increased by 42% with respondents who were shown contextual video.

Some 71% of participants engaged with pre-roll video when viewed alongside contextual content, compared to 50% when viewed without.

Recollection of pre-roll also increased when the page featured contextual content, according to Video Intelligence.

"As a publisher trying to scale O&O video, we're faced with delivering a prominent video experience that rewards both the publisher and consumer,” stated Paul Nyhart, director of video programming at The Wrap.

“So far, we've found contextual video has not only been a boon to our revenue efforts, but as the data conveys, has improved our overall user experience. For a relatively small production team focused primarily on profitability, this not only gives us a shot in the arm financially, but helps guide our editorial decisions," he noted.

"If we can leverage supply to build revenue and help inform demand, while strengthening our on-site user experience, that's a win all across the board,” Nyhart added.