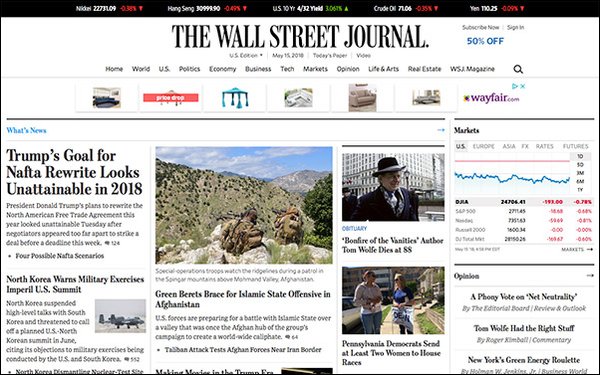 Digital subscriptions to News Corp,’s The Wall Street Journal, The Times, The Sunday Times of London and its Australian titles grew an average of 20% in the quarter ending March 31.

“At our mastheads, digital audiences expanded at a time when premium news has become more important to readers and advertisers,” stated CEO Robert Thomson.

Revenue for News Corp.’s newspaper unit grew 2%, or $23 million, compared to the same quarter in 2017, thanks to bumps in circulation and subscriptions at The Wall Street Journal.

Cover and subscription price increases also contributed to the revenue growth, according to the company, but were partially offset by lower newsstand volume at News UK.

Digital revenues represented 29% of the newspaper unit’s revenues, compared to 24% in the prior year, due to paid digital subscriber growth.

The Wall Street Journal hit 1.49 million subscribers by the end of March, from 1.19 million last year.

But advertising revenues were down 3% at News Corp, due primarily to dips in print advertising in the U.S. and Australia.