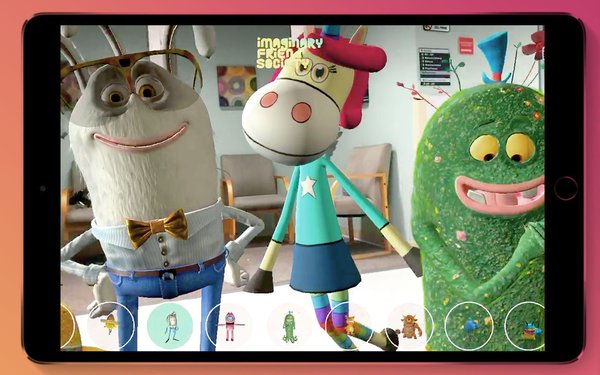 In a new campaign to draw attention to Brain Tumor Awareness Month, the Pediatric Brain Tumor Foundation is using an AR experience.

The effort, from RPA and Tool of North America, is part of the Imaginary Friend Society campaign that includes 22 animated films made of imaginary friends who explain cancer to kids in an understandable way. Kids can use the AR app on demand when they need extra emotional support.

There are limited resources during pediatric cancer care that young patients can actually relate to and understand, according to RPA. Using a simple mobile app, kids and medical professionals can bring the Imaginary Friend Society characters to life in any environment. These characters offer words of encouragement and hope to boost confidence during difficult times.

A survey completed earlier this year reveals that, across the board, anxiety is the largest issue for children diagnosed with brain tumors or other cancers, according to the foundation.

“This AR experience can transform the experience of kids while they are being treated at the hospital just before MRI scans, shots or surgery and help them find some cheerful reassurance when they are anxious or overwhelmed by their feelings,” says Dr. Mark Krieger, chief of neurosurgery at the Children’s Hospital in Los Angeles, in a release.

The foundation is teaming with child-life specialists, social workers and medical staff at hospitals across the U.S. to bring the AR experience to their interactive patient care. RPA and Tool work on the account on a pro-bono basis.

Last September, the foundation and RPA unveiled 20 animated short films that explain every facet of cancer these kids face, such as “What is an MRI?”, “Feeling Sad,” “Finding Out You Have Cancer,” “Blood Transfusions” and “Returning to School.” Two new films have just been added to the collection: “Staying Friends with Your Friends” (Wolf & Crow / directed by Matt Berenty )and “Memory Loss” (Nexus Studios / directed by Smith & Foulkes).

The Imaginary Friend Society is now a permanent fixture in select hospitals around the country, has been translated into multiple languages, and is available in several countries.