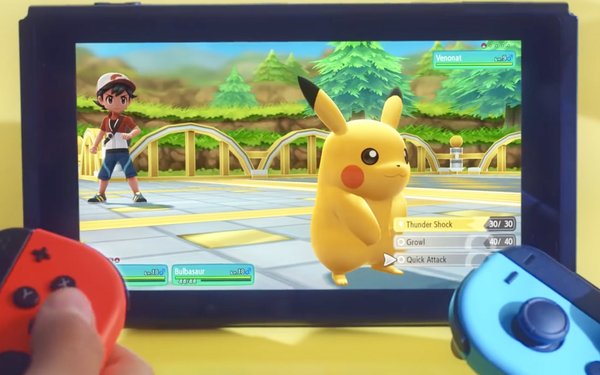 Nintendo is  introducing three new ways to play Pokémon for its Nintendo Switch units. It’s a major rollout borne of a need to create material for new players who showed up for the first time when Pokémon Go took off two years ago.

“With the launch of Pokémon Go in 2016 and the global sensation that ensued, millions of new players were introduced to the world of Pokémon,” said Junichi Masuda, director at Game Freak, the company that was the primary developer of Pokemon Go, in a statement. “For many people, Pokémon Go was their first experience with the Pokémon brand, so we have crafted these two new titles to be an accessible entry point to our core RPG [role playing games] series while giving our longtime fans a new way to play Pokémon.”

The third game, Pokémon Quest,  was introduced a couple days ago. It’s “free to start,” as gamers call it, and can be downloaded on Nintendo eShop. It will be available via App Store and Google Play in late June, also for free.

New, successful Pokémon Go titles ought to be money in the bank for the The Pokémon Company International, Nintendo and game developers. Pokémon Go brought in $950 million in its first year, much of it from consumers who had never or rarely had played computer video games. It also seemed to have revived the brand.

“Many of us thought that Pokémon was a thing of the past, but with the release of the new game Pokémon Go, it’s all anyone can talk about,” wrote the Redfin website in July 2016 in an article purporting to list the 10 U.S. cities with the most-obsessed fans. (Most hooked?: San Antonio.) “It seems like Pokémon Go has taken over society and pushed everyone into the virtual world inside their phones.”

That created an odd problem and opportunity. Now here are millions of Pokémon players who have become dedicated players but missed the backstory build-up they could have gotten from the first go-round. The Let’s Go series serves as a bridge for them. Those games take players back to a familiar setting from Pokémon Yellow, released in 1998, and with features designed for the Pokémon-come-lately player.

But it seems Pokémon is trying to be mindful of more experienced Pokémon players who could get restless as the brand tries to bring along the newbies. For them, Nintendo, which owns about 40% of Pokémon, promises a new core game by 2019.