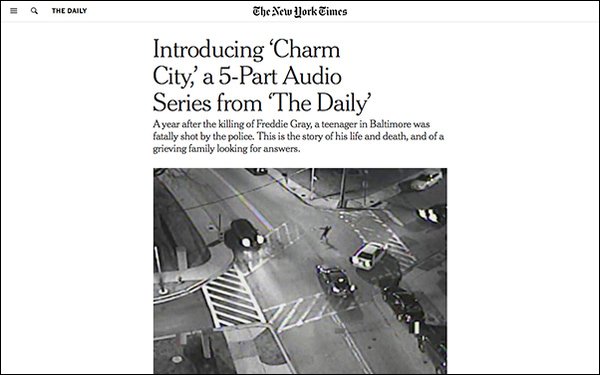 The New York Times’ popular podcast “The Daily” will devote a week to a new five-part, investigative series about a Baltimore high-school student killed by a police officer.

Called “Charm City,” the series will be hosted by Sabrina Tavernise, a national correspondent for The New York Times.

Tavernise and “The Daily” producer Lynsea Garrison spent four months investigating the case of Lavar Montray Douglas, known as Nook, a teenager killed a year after the death of Freddie Gray. Gray was 25 and in police custody when he was killed. Nook was one of seven teens from one high school in Baltimore killed in the violence that followed the death of Gray.

Nook was shot by a police officer whose identity has not been revealed.

“We wanted to tell [Nook’s] story for the simple reason that events like these are rarely told, even though they have become ordinary,” Tavernise wrote in an post introducing the series.

“Nook and his friends—many of whom have also been killed—were typical for homicide victims in Baltimore. They all had records with serious crimes. But they were boys. Most hadn’t even turned 18. And the deeper question in our minds was: How did things get like this for them?”

The series interviews Nook’s grandmother, Davetta Parker, and mother, Toby Douglas, and their efforts to find the truth about Nook’s death.

“Davetta and Toby taught me so much about Baltimore -- about the police and the streets, but also about resilience and grief. I want our listeners to be able to learn from them too,” Tavernise stated.

The first of five episodes was released today. “Charm City” is available on The Times’ site, or via “The Daily” podcast feed.

The New York Times gave subscribers early access to the audio series, which covers the Islamic State and the fall of Mosul, Iraq. “Caliphate” is hosted by Times journalist and three-time Pulitzer Prize finalist Rukmini Callimachi.

“One year after launching ‘The Daily,’ we are expanding to take on narratives so complex and important they demand a different form of audio storytelling,” Lisa Tobin, executive producer for audio at The Times, stated at the time. “We are striving to be as ambitious in pushing the boundaries of podcasting as our colleagues are in their reporting.”

The Times has pushed to increase its subscription products. Last week, it announced it had formed a team to create a new subscription offering focused on parenting.