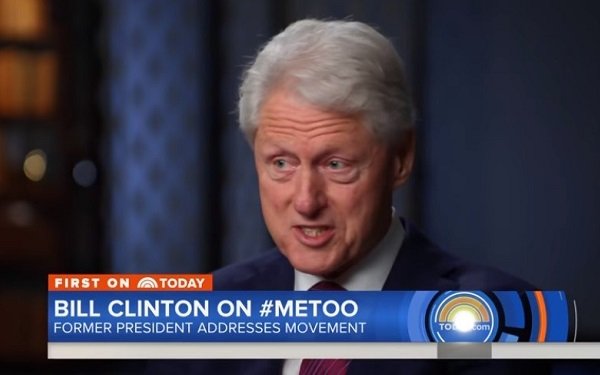 TV apologies. Many on-air TV types make them. But not everyone. And not all those regrets appear on TV.

Are there any other politicians or TV performers missing here? Some would say President Trump should be making similar amends to the groups he has insulted. Add in movie/TV executive Harvey Weinstein and TV performer/comedian Bill Cosby.

It is unclear what effect these mea culpas -- in whatever venue -- have on TV viewers and TV advertisers that support the programming.

TV public apologies can be harder to find. Roseanne Barr and Samantha Bee made their apologies on Twitter.

For his part, Clinton, on NBC News, did refer to a less-than-optimal previous “public” apology for his actions concerning Monica Lewinsky while he was President. That somewhat hostile TV turn was followed up with a more sincere apology at an public event in New York City and other places.

Remorse and redemption are traditional character behaviors for key TV screen attention -- whether on fictional TV dramas or comedies  or from real-life public officials via press conferences and other venues.

Before Barr and Bee, Fox News Channel’s Laura Ingraham, host of “The Ingraham Angle,” apologized in early April for remarks about Parkland, Florida high-school student survivor-activist David Hogg, about his getting into college. Ingraham made her apology remarks on Twitter. And some TV show advertisers took a hike.

We don’t know the exact sentiment of her viewers. But by the end of May, her show’s Nielsen ratings grew.

What about Barr and Bee? For the former, ABC continues to work hard to salvage another season of “Roseanne” with the remaining cast, under a new show name. Did Barr’s firing and subsequent apology make a difference here?

After Samantha Bee’s remarks on Ivanka Trump, two advertisers publicly said they would suspend media. There were no other announced defections.

Twitter seems to be the optimal place to make atonements -- which makes sense. The print-based digital platform has lower media heat than the glare and immediacy of the TV screen.

So apologies work? Or is it a waste? And where is the best venue to do it?

Seems President Trump needs to consider this. Our TV President knows U.S. citizens vote with their remote control-sensitive fingers and delete keys on their electronic devices.