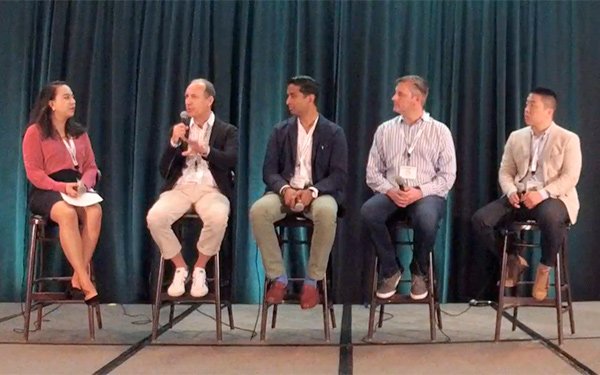 Publishers often feel they are at the mercy of Facebook’s algorithm — which has  been blamed for the demise of some digital brands.  But publishers on a panel Tuesday at MediaPost’s Publishing Insiders Summit discussed how they effectively use the platform to benefit their business.

Errico said Trusted Media Brands publications like Reader’s Digest had actually seen an increase in engagement and traffic to the site in year-over-year comparisons.

The reason for this: “The algorithm change was based on engagement rates, and ours were high, so it did not affect us.”

The other participants on the panel echoed this trend: increased engagement, shares and video views on the platform.

While the Ranker channel on Facebook did dip in terms of site visits, Morrow said Ranker has recently developed 25 niche channels, and continues to launch more, as a successful strategy to build its audience.

“The more focused the channel, the more narrow the better results we’ve had with it,” Morrow said, adding: “We noticed the algorithm changed to focus more on commenting around a video. That is now a core metric, and we changed our metrics on that from a video standpoint."

This, in part, explains why publications like LittleThings blamed the Facebook algorithm change for its demise, Errico and Morrow said —the digital brand did not have enough engagement on its Facebook content and did not diversify effectively.

But Morrow believes the real reason behind LittleThings' downfall is Facebook's change in January to its influencer policy, which “completely wiped out that avenue of audience development for LittleThings.” The change meant influencers had to be part of the creative editorial process in order to repost on Facebook and monetize content.

Unfortunately, LittleThings “relied on that one strategy within Facebook,” and when it was changed it drastically hurt its business.

So how do publishers use the platform effectively?

Ranker has developed a strategy around niche audience development, using video and still photos to drive engagement on the channel to develop reach, then use link posts to drive audience, Morrow said.

“We use this combination of multiple types of content to drive different facets of Facebook strategy that compliment each other," he said.

In the last 18 months, the company has developed a software using the top 10% to 15% of Ranker’s organic posts to do A/B testing in a paid environment. Use “Facebook’s vast audience targeting, as well as our own internal data, to spin those into paid in a profitable manner. We have a system that automates that bidding, and kills those campaigns that don’t have high ROI and expands the campaigns that do.”

Using this technology, Ranker has brought up its site visits from 93 million in October to 213 million in May.

It won’t work to “just blast content out on the platform and expect a broad reach for every piece of content.”

“We leverage that direct marketing aspect and sell subscriptions, books and online classes, and that’s a powerful combination,” Errico added.

Facebook can also be used as an effective research tool on readers, Menon added. “We have 12 million followers on Facebook — that’s a large focus group,” he said. “With our data science team, that is real gold to us.

That pool can be used by a publisher to analyze what content appeals to its readership.

“One thing really shifted in the last year: learning what Facebook can tell us about our own readers that can help us understand how to engage with them on other platforms,” Menon said.

Facebook, at the end of the day, is “a necessary evil, but a necessary strategy,” Won said.

Errico said his team is “watching [Facebook] very cautiously," and “reevaluating” its relationship with the social platform and what data it shares with Facebook Pixel. “We have done some testing around not using their Pixel in certain instances to see what happens on the backend, and looking to see if there are potentially other options."