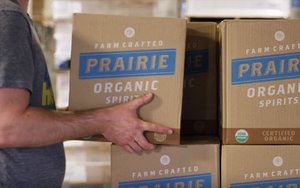 Prairie Organic Spirits has unveiled the first work by its new agency of record, Haberman: a national campaign dubbed “A Better Spirit.”

Prairie, which pioneered organic spirits and is the top-selling certified-organic brand, is investing in the campaign to support aggressive sales-growth goals for 2018.

With 80% of U.S. households already buying organic food on a regular basis, Prairie believes that consumers will be increasingly open to the idea that even their alcohol should be organic, according to Haberman, which has also worked with Annie's, Organic Valley and Earthbound Farm.

The creative’s taglines include: “Drink Responsibly. Drink Organic” and “You shop organic. Try drinking that way.”

The multichannel campaign features digital video ads that highlight how Prairie’s vodka and gin spirits are better for the land, for farmers, and for consumers who value sustainability.

One 15-second video focuses on the family-owned, Midwest-based organic farmers. Another focuses on “Guardians of Prairie”: Employees who individually taste-test the batches of alcohol, which are distilled to taste rather than a prescribed number of times. A 30-second anthem video (below) combines the benefits messaging.