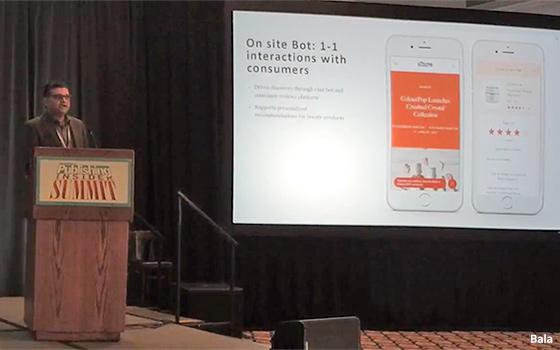 Earlier this year, Karthic Bala was named Conde Nast’s first ever Chief Data Officer. Prior to that, he was head of data strategy at the company. However, as the media giant ramps up its digital charge, the new roll seemed apt.

In an interview in March with Publishing Insider, he stated: “Traditional publishers are focused on aggregating audiences and monetizing them. We, however, have started to work like a technology company and are building the capabilities, both organically and through acquisitions, to revolutionize the way we provide marketing solutions.

"By enhancing our platform to personalize our users’ experience, using large volumes of data in real-time, we are able to increase audience engagement.”

During a keynote address Bala delivered at MediaPost's Publishing Insider Summit, he expanded on the direction Conde Nast is taking in the digital realm and how he has used data and technology to maximize results for advertisers.

Bala spoke about the learning curve he encountered when he first came to Conde Nast: When he referenced models, he was speaking of charts and graphs that showed how data could be better utilized; his coworkers minds’ went straight to the runway. He has to help his coworkers reframe how they approached publishing in the 21st century.

“We’re really competing with other companies in the new world, like the Facebooks and Googles, which are engineering-driven,” he told the audience, noting that one of his key tasks in the beginning was to drive optimization.

Conde Nast counts 125 million digital and video, 174 million social media and 50 million print customers across 22 brands. To collect its data sets, Bala and his team used subscriptions, emails, surveys, data from social media and debit and credit-card data to track the interests and behavior of the company’s audience.

Traditionally, publishers collect data, aggregate overnight, then target their audience the next day. However, Conde Nast has developed the technology to do this in real time.

Bala was involved in building Spire, a platform that targets potential customers for advertisers through the company’s readership, from the ground up. Supporting Spire are several components.

For example, Infinity ID is an ID everyone receives when they visit a Conde Nast website. They then combined this ID with an email and are able to create a unified image of that person.

Through the creation of Spire, partnerships with microprocessor companies and the acquisition of data companies, like Citizen Net, Conde Nast has been able to aggressively expand its reach. The company, since acquiring Citizen Net, has aggregated over 800 million profiles and built specialized audience sets.

Bala reported that through this specialized targeting, one ad campaign from a cruise line targeted to New Yorker readers recorded a 10% to 15% increase in response than on average.  In fact, the company reports 50% of its emails are opened by consumers. A rate Bala has never seen in his career.

He ended his talk teasing a new bot function that will allow a one-to-one interaction with customers.