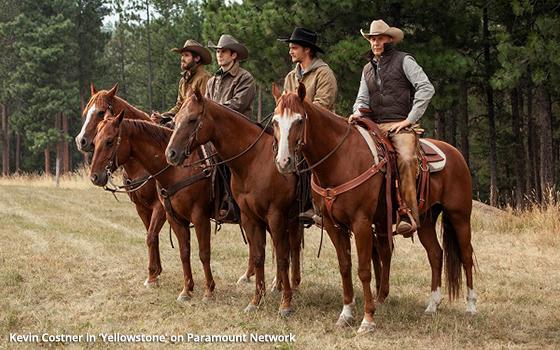 The tender instrumental melody known as “Ashokan Farewell” is so iconic from its use as recurring theme music in the Ken Burns’ “Civil War” documentary on PBS that to use it in any other TV context feels like straight-up copycatting.

For millions of people, using this great piece of music to underscore anything less than the tragedy of the Civil War cheapens the music and any TV show that decides to use it

This new western drama premiering this week on Paramount Network -- titled “Yellowstone” and starring Kevin Costner -- is a case in point.

When this melody wells up near the conclusion of the premiere episode to accompany a funeral, your first reaction might be a thought much like the one I had when I previewed this show. Oh, brother, I thought. Are they really going to use the “Civil War” music here? Really? Get your own music!

However, it is not as if the occurrence of this beloved music suddenly swoops in to undermine and ruin the show. On the contrary, for me, this episode had already been a pretty tough slog through most of its 90-minute length (its running time without commercials).

“Yellowstone” is a modern-day western in which Costner plays the patriarch of a ranching family in Montana.

Of course, as many people well know, Yellowstone National Park is in Wyoming, not Montana. However, the fictional ranch in the show is called “Yellowstone.”

As you might be able to predict (since so much of this show is predictable), the Costner character is a tough old bird, and he wishes his sons to be just as tough (which in his case means stubborn, among other things).

Costner's rancher stands at the center of a conflict involving at least three parties. The other two are real estate interests who wish to build a suburban housing development on the edges of the rancher's sprawling property, and an Indian reservation that also abuts his property and claims ownership to any of his cattle that wanders onto their land.

There are also various politicians in the mix, plus energy companies who seek to exploit oil reserves in and around the ranch. But in Episode 1, these parties are not significant.

It does seem like a lot to handle for one aging ranch patriarch, but the exercise of watching him handle it unfortunately generated little interest for me.

In other words, these conflicts might be top-of-mind for him, and they might even present existential threats to his way of life.

But the problem with this show is that all of Costner's grimacing and all of the wide shots of the Montana range that are positioned throughout the show are not enough for this city dweller to develop any sympathy for any of the parties facing off here.

This scenario -- the rugged rancher butting heads with Progress -- is one that recurs over and over again in movies and TV shows. The more you see it, the more clichéd it becomes.

For example, take the conflict between the cowboys and Indians over the issue of who owns the land. This is so old-hat that the only thing that could possibly lift this storyline above all of the other thousand times it has been depicted on film would be to come up with a solution that suddenly solves this age-old struggle.

However, I would not hold your breath waiting for that to happen.

Already this year, the new Paramount Network's track record has been very good -- starting with “Waco” earlier this year and continuing with “American Woman” earlier this month.

“Yellowstone,” however, is a swing and a miss.