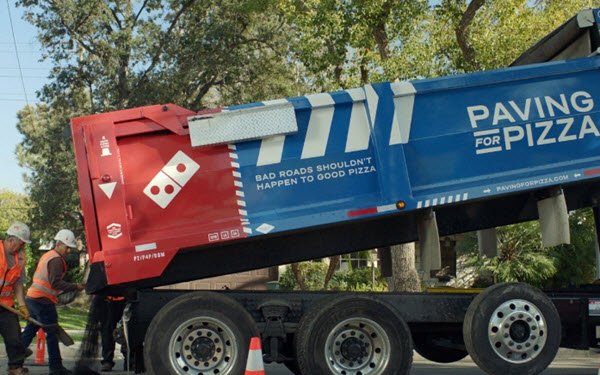 Domino’s Pizza is running a promotion encouraging people to nominate their towns or cities to win grants to help repave their roads.

The “insurance” promise: If a customer’s pizza is accidentally damaged after it’s picked up, and is returned (uneaten) within two hours after the pickup, Domino’s will remake/replace it at no additional cost.

The QSR is positioning the “Paving for Pizza” promotion as “saving pizza, one pothole at a time.”

“Nominating” a town simply requires providing its zip code and your email address on the promotion’s site, by August 31.

While the specifics aren’t disclosed on the site, Domino’s told the “Today” show’s site that it will award 20 grants after reviewing the nominations and “gauging the interest of municipalities in receiving a grant.” It is not disclosing the grant amounts.

The promotional site spotlights those projects, and offers a video showing what can happen to pizzas on bad roads.

The paving promo is also being used as a vehicle (so to speak) to push Domino's' latest special offer of a large, three-topping takeout pizza for $7.99.