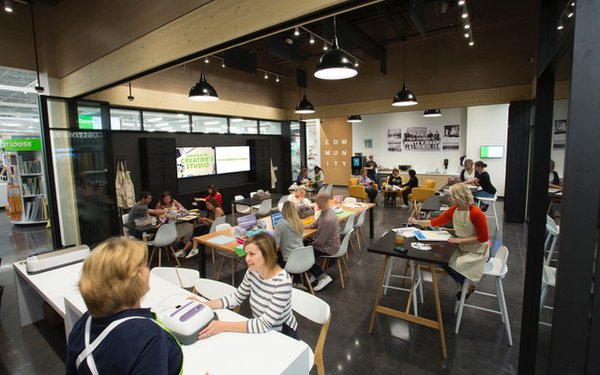 Joann Fabric hopes to become a social hub for the crafty set, launching a new retail format that blends tech, community and classes into a different kind of store.

The just-opened Columbus, Ohio-concept store stems from 18 months of intense testing and research, says Steve Miller, senior vice president, marketing and e-commerce. “We’ve always been about sharing,” he tells Marketing Daily, “whether it’s about sharing what they make with other people, sharing a skill with a friend or family member and more recently, sharing socially. But the store hasn’t kept up, and we’ve endeavored to build a more sharable experience in crafting.”

The Creators’ Studio, which includes a Starbucks kiosk, is central to the plan, and the Sephora-meets-Etsy vibe is intentional. A touchscreen kiosk provides popular Pinterest craft projects, personalized based on their taste preferences. While there isn’t food for sale, “people are pretty likely to be able to snag a cookie from the test kitchen,” he says.

The Studio “is the heart of the store, whether someone wants to sit down with a cup of coffee and look at a design book, bring in a troop of Girl Scouts working on an activity for a badge, or makers who are using the space to livestream classes.”

New services include personal shoppers and Sew & Go, which allows customers to hand off projects to seamstresses. “We do the work, and you take the credit,” he says. And it’s also added Joann +, targeting high-volume makers, much as stores like the Home Depot cater to professionals.

“We don’t think anyone has addressed this need before, and our research indicates that one in five active crafters is also selling their projects.”

Installations around the store feature work from local artists, some of it for sale.

He says the new format grew from research that isolated three distinct psychographic groups. The largest group, he says, “live and breathe for sharing experiences with others. This store is pretty much designed around this shopper, who is not necessarily younger, but they are three times more likely to craft something and give it away, and far more likely to craft inter-generationally,” he says. “For them, the joy is sharing the finished product.”

A second group “are almost polar opposites, and regard crafting as solitary. “It’s their 'me time,’” he says. “They’ll often introduce themselves by craft, as in ‘I’m a knitter’ or  ‘I paint.’”

A third group is especially eager to learn and hungry for classes.

Joann Fabric, based in Hudson, Ohio, plans to begin rolling the new store format out as it collects customer feedback. Marketing will be fully digital. “We’ll be working with our top influencers, offering demos and broadcasting on social channels,” he says. “And we plan to have a variety of vendor partners. This is just one step in the journey.”