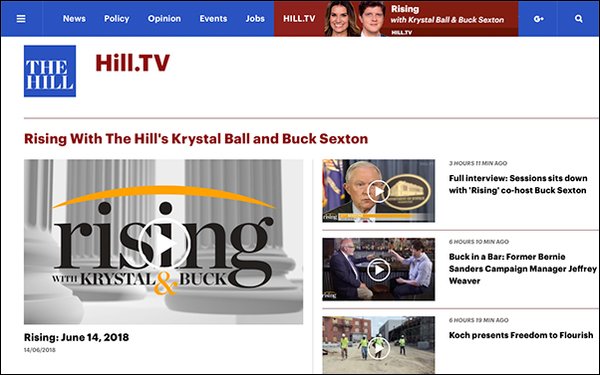 After a year of building out its video team, The Hill launched an online political television network yesterday, called Hill.TV.

“Rising” claims to be the only daily national morning show broadcast live from Washington, D.C., from The Hill’s new K Street studio.

Hill.TV aims to “cuts through the biased coverage of the traditional political news outlets, giving citizens the opportunity to shape their own views without being influenced by partisan media,” according to a statement.

In an interview released today, Attorney General Jeff Sessions spoke to Sexton about the decision to fire ex-FBI director James Comey last year, adding that the impending release of the Justice Department inspector general report (which looks into Comey's handling of the Hillary Clinton email investigation) will "reassure the American people that some of the concerns that have been raised are not true."

The Hill is planning a slate of streaming programming for Hill.TV, including a progressive opinion show hosted by Jamal Simmons, a former adviser to two Democratic White Houses and a political analyst on various networks.

A conservative opinion show is also in the works.