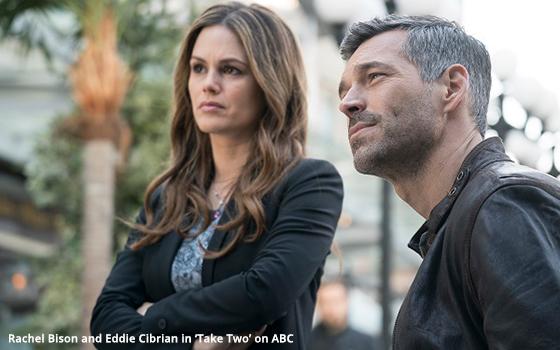 The froth of summer refreshment is upon us.

On ABC Thursday night -- the first night of summer -- the froth takes the form of a detective series with a handsome leading man (Eddie Cibrian) and comely leading lady (Rachel Bilson). They are TV stars with a capital “T” and “V” -- and this show, titled “Take Two,” is TV at its most traditional.

He’s a hard-boiled L.A. detective and she’s the once-popular star of a TV cop show who is seeking a “second take” in Hollywood as she tries to recover from the humiliation of a public scandal.

The two are thrown together when she needs to trail a real-life P.I. in preparation for playing one in a new movie. He reluctantly takes her on as a favor to an old flame. Can this detective and this actress share the same detective agency without driving each other crazy? (Cue “Odd Couple” theme music.)

I think we all know the answer to that question: Of course they will drive each other crazy -- crazy with love, that is! What did you expect?

Certainly, I am getting ahead of myself here. They don't fall in love in Episode One, although they do make the first attempts at making goo-goo eyes at each other.

“Take Two” has been titled to reflect the show's title twosome and the actress’ quest for redemption after getting out of rehab.

Like summer clothing, the show is lightweight, relaxed and ready to wear -- which is not a bad thing at all.

Even when it veers into scenes of murder and violence, the attitude remains upbeat. Dead bodies found in bathtubs can be such downers, can't they? But not here. In this show, a corpse provides an opportunity for repartee.

The fact is, “Take Two” is a very enjoyable show -- the kind of show that we have come to expect for summer TV.