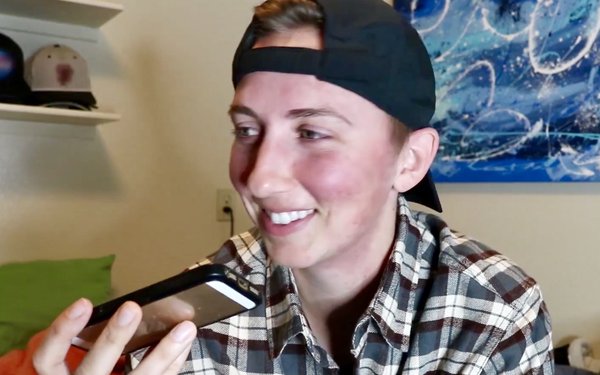 Verizon wireless this month is helping LGBTQ individuals participate in what it calls the first “connected pride parade,” creating a series of visual backgrounds for users to choose so they can digitally march along with others.

The digital parade, activated today, is part of Verizon’s efforts to celebrate LGBTQ Pride Month. “From big cities to small towns, we’re stronger when we’re #Connected by Pride, a passage on that site says. “That’s why we’re hosting the first connected pride parade — so people across the country can march side by side, celebrating equality and inclusion for all.” That innovative feature was created by digital agency R/GA.

This month, Verizon will participate in 25 Pride parades nationwide, and one in Dublin, Ireland.

In addition, the McCann agency produced a one-minute video which, through a series of quick cuts, shows several young people calling their parents — via a smartphone, of course — to inform them for the first time that they’re gay. A Verizon spokesperson says the coming-out phone calls were real, and as we see, they all end happily, if occasionally tearfully. The YouTube video also premiered last night during the “MTV Music Awards.”

Andrew McKechnie, Verizon’s chief creative officer, says in a phone chat with Marketing Daily that the spot will show up on NBC and Bravo in coming days. “It’s obviously very emotional,” he says. “There is such a community that already has been videoing that conversation and posting them online. It’s one of the most emotional days of their lives. So that was something we leaned into.”

Verizon touts its strong support of the LGBTQ issues, opposing state bills that it believes discriminate against members of that community and in support of marriage-equality provisions. Verizon as an employer provides LGBTQ HR benefits, including help to would-be adoptive parents. It has a 100% rating from the Human Rights Commission.

McKechnie  points to the company’s longtime support of PFLAG, the advocacy group for parents and friends of LGBTQ people. This year, Verizon is donating $250,000 to the organization it has supported since 2002.

Though the digital phone market is now so ubiquitous that every demographic group is fully involved, as far back as 2013, gay consumers proved to be early leaders in relying heavily on their smartphones. According to a Digitas research report that year,  51% in LGBTQ community had already used a smartphone/tablet for three years or more, compared to 28% of the general population.

Related to the Verizon video, the Digitas data said 35% of LGBTQ users 18-24 used a mobile device when they were coming out. “They have become a bellwether for the entire population, providing a preview of what's to come as more consumers embrace mobile connectivity,” an agency executive observed at the time.