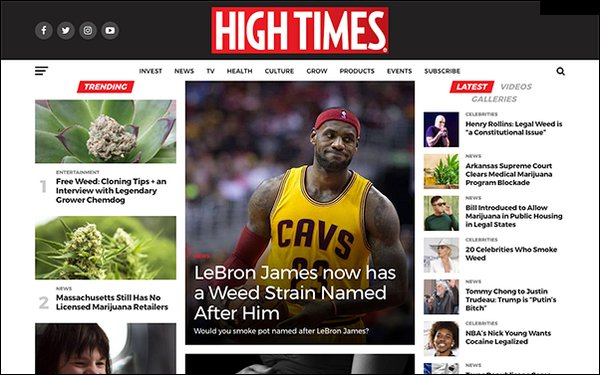 Cannabis-focused magazine High Times took its first major steps Tuesday to launch its IPO, with an “equity crowdfunding campaign” that allows investors to buy shares of the company at a discounted rate before it lists on the Nasdaq.

The 40-year-old company distinguishes itself as a business focused on media and events tied to legal cannabis culture — it does not distribute cannabis or cannabis-infused products.

Under the SEC’s Regulation A+, High Times shares are set at a value of $11, a 10% discount from the anticipated opening price on the Nasdaq.

“Given the fan base that we have created, it is important that we allow our loyal brand followers the opportunity to become equity owners of the company” stated Adam Levin, CEO, High Times.

“It was important to me that this offering be open to anyone who wants to join this historic moment, not just those with big brokerage accounts,” Levin added.

“It’s like a virtual road show," he told Publishers Daily.

This campaign gives investors an early opportunity to participate in what will be one of the first Cannabis-related stocks on the Nasdaq, and allows dedicated readers to own common stock in High Times' business. So far, the campaign has received “a great response," Levin said, with checks coming in from $11 to $100,000, mostly from individuals.

Investors can also buy the stock using their credit cards. Shares are available for purchase at hightimes.com/invest.

The company will see how much money is raised over the next four-to-six weeks, and then list on Nasdaq, Levin said.

High Times plans to use the capital from the IPO to expand its publishing, events and licensing businesses, as well as invest in video and audio content and add product lines and brands.

Most of the company’s revenue comes from its events, such as its popular Cannabis Cup, one of the world’s biggest marijuana-focused trade shows. There will now be an “Investor’s Village” at the Cup, Levin said.

The Reg. A+ filing has a $50 million cap. High Times will also meet with more investors throughout the month.

Levin said he is curious to see how High Times' engagement rates may be affected by consumers who are also shareholders. “Fast forward to next year: How does [an IPO] impact engagement of shareholders? Will they engage much closer? And how does that impact a media business?” he wondered.

The brand is now reaching non-endemic advertisers: Chrysler recently took out ads on High Times, Levin said, a sign that clients are recognizing the publication as a “brand-safe environment."

Culture offers local reach into more than 10 different localities (across the US, Canada and the UK), which will be expanded to High Times Media's advertisers.