Up, Up And Away: 'Roseanne' Returns Without Roseanne 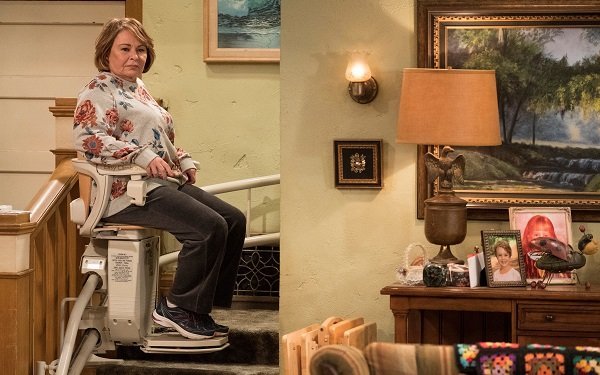 The question posed in the headline of last Tuesday's TV Blog was answered Thursday evening when ABC officially announced that it would go ahead with a “Roseanne” spinoff without Roseanne Barr.

The headline on the TV Blog was: “To Spin Off Or Not To Spin Off: That Is The ‘Roseanne’ Question.” The answer was yes. A new show with the focus on the family -- and the title we predicted, “The Conners” (described as a “working title” at present) -- was described in the news release that went out late Thursday.

" 'The Conners" (working title), a spinoff of the groundbreaking family comedy 'Roseanne,' has been greenlit to series with an order of 10 episodes for fall 2018," read the triumphant first sentence of the ABC announcement.

Then came a general description of the show: “After a sudden turn of events, the Conners are forced to face the daily struggles of life in Lanford in a way they never have before,” said the release, seeming to make a reference to the real-life “turn of events” that left the legendary sitcom formerly known as “Roseanne” without its titular star.

The sentence makes you wonder: What will be the “sudden turn of events” in the show? Will they have Roseanne being struck fatally by a train, like Charlie Sheen's character in “Two and a Half Men”?

“This iconic family -- Dan, Jackie, Darlene, Becky and D.J. -- grapples with parenthood, dating, an unexpected pregnancy, financial pressures, aging and in-laws in working-class America. Through it all -- the fights, the coupon cutting, the hand-me-downs, the breakdowns -- with love, humor and perseverance, the family prevails,” said the release, rounding out the first paragraph.

The release then gave the news that John Goodman (Dan), Laurie Metcalf (Jackie), Sara Gilbert (Darlene), Lecy Goranson (Becky) and Michael Fishman (D.J.) would all be back. The announcement from ABC gave no indication that the new show would center on the Darlene character, as had been rumored.

The newer cast members who were introduced as various Roseanne grandchildren this past season were not mentioned in the release either. The new show will assume the time slot formerly reserved for “Roseanne” -- Tuesday nights at 8 Eastern -- this fall.

The third paragraph of the news release consisted of one sentence: “Roseanne Barr will have no financial or creative involvement in the new series.” As they said in “Goodfellas” after they whacked Joe Pesci: “And dat's dat.”

Beyond the question of whether or not ABC would go ahead with this spinoff after about two weeks of speculation and rumors, the release did not answer a number of other questions, among them the issue of how the Roseanne character will be done away with.

If they kill her off, then there’s no chance for her to ever make a return as a guest at some point in the unforeseen future when popular opinion might turn toward forgiving her for the tweetstorm she issued a few weeks ago.

And certainly there was no word on whether or not the show will continue to pursue storylines or adopt the points of view that drove the phenomenal popularity of the “Roseanne” revival in the first place earlier this year.

One thing that Roseanne herself brought to the table was a kind of “anything can happen” atmosphere. That level of suspense over what she (or some other character) will do or say next will therefore be absent from “The Conners,” which can be expected to play it safe (or at least safer) following the way the “Roseanne” show imploded.

Despite the popularity and familiarity of the surviving Conners, a “Roseanne” show by any other name seems diminished without the electrifying personality who started the whole thing. People often say America is a forgiving nation. Maybe, if “The Conners” lasts long enough, Roseanne might be forgiven too.