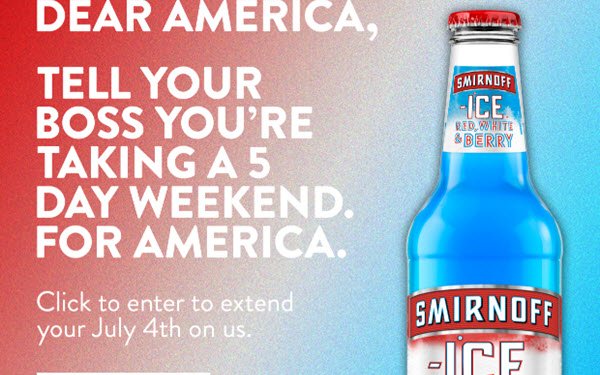 Saying that the mid-week timing of this year’s July 4 holiday is bound to put something of a damper on the celebrations, Smirnoff Ice’s Red, White & Berry variety is running a sweepstakes in which 100 U.S. entrants will receive money to cover taking off two more days.

From June 24 through July 1, fans 21 and older can enter by commenting on a contest post on the @SmirnoffUS Facebook and Instagram pages. The idea is to state how you would spend those extra two days of “freedom” on July 5 and 6.

Each winner will receive $500, regardless of their actual salaries or employment status.

The brand is employing print, social and digital banner advertising (shown) to promote the sweeps.

Smirnoff will also have a celebrity presence at New York City’s Pride March on June 24.

Jonathan Van Ness — star of TV’s “Queer Eye” and his own web and podcast series — will represent the brand as part of its participation in the parade up Fifth Avenue.

In honor of Pride Month, the brand is also expanding its commitment to the Human Rights Campaign, by pledging to donate $1 for each Smirnoff “Love Wins” bottle made, for a minimum total of $1 million, starting in 2019. Funds go to supporting local HRC events to drive awareness of the fight for LGBTQ equality.

The brand, which launched its “Love Wins” marketing campaign and same-named limited-edition bottles for Smirnoff 21 in May 2017, reports that the bottles generated nearly a half-million dollars in donations to the HRC in 2017 and 2018.

Now, the bottles are again available nationwide for a limited time.