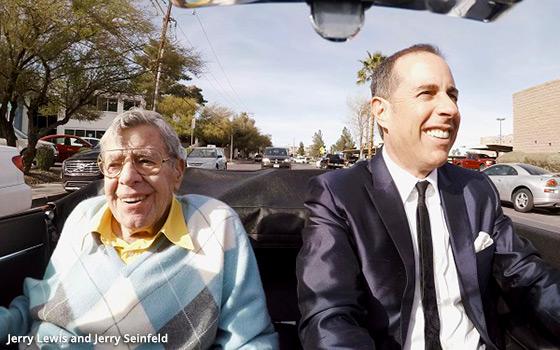 Seinfeld, 64, did a series of interviews this week in which he seemed to indicate that he took some sort of bizarre pleasure in Roseanne’s career “suicide.”

The interviews took place at a promotional event that Netflix held in New York to promote the current season of Seinfeld’s comedian-interview series “Comedians In Cars Getting Coffee” (pictured above: Seinfeld with the late Jerry Lewis).

In one interview, Seinfeld is quoted as saying he “loves ‘people that crash and burn’ ” -- in this case, Roseanne, whose career is in tatters following the tweet storm she issued a few weeks ago in which she made a remark about a former Obama aide that was widely interpreted as racist.

“I really enjoy that,” Seinfeld actually said about other people who find themselves in trouble for various infractions that don't play well in the court of public opinion.

“And a lot of people have done it in a lot of different ways, and I like to kind of rate them and compare them,” Seinfeld said joyously of the suffering of others.

“All she had to do was press ‘share’,” he said of Roseanne's tweet storm, “and it was all over. So I thought that was kind of cool ’cause it was different. … You know, drugs and sex, those are the usual things. This was something new, and I thought it was inventive.”

These remarks make you wonder: What did Roseanne ever do to Jerry Seinfeld that he would be so gleeful over her misfortune?

But wait -- there's more. Seinfeld said in one of the interviews that ABC's firing of Roseanne was “overkill” because “she's already dead.” Ouch!

“I don't even know why they had to do that,” he said of her dismissal from her newly revived sitcom. “It seemed like, you don't need to murder someone that's committing suicide. I thought the firing was overkill. She's already dead,” he said.

Not only is she “dead” to Seinfeld,” but Roseanne was also expendable and replaceable, he said in one interview. The network should “get another Roseanne,” he advised callously.

“They brought Dan Conner back. He was dead, and they brought him back. So why can't we get another Roseanne?” Seinfeld mused. “There's other funny women that could do that part. You need to get the comic in there. I hate to see a comic lose a job” -- unless the comic is Roseanne Barr, apparently.

These thoughtless, unsympathetic comments reveal something I have occasionally observed about comedians: They are in a business whose aim is to create happiness -- i.e., pleasure through laughter -- but very often the comedians themselves are often unhappy and/or critical, thin-skinned, rivalrous and, at the very least, lacking in empathy.

Maybe Jerry Seinfeld is all or some of these things or maybe he is not (I don’t know the man), but for a guy who celebrates comedy and comedians on his Netflix show, and gives the appearance publicly of supporting other comedians, these comments about Roseanne Barr seemed out of character. Or were they?