The Two Most Overused Words In TV News: 'Breaking News' 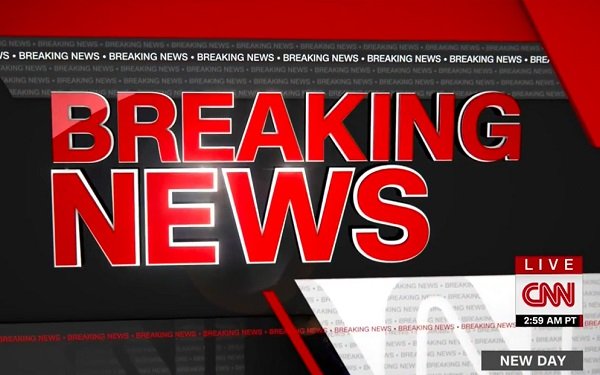 An innocuous story on a trade press Web site on Thursday triggered this TV Blog about the state of “Breaking News” on TV today.

It was a story about TV graphics. Specifically, it reported the news that CNN has redesigned its “Breaking News” alerts (as shown in the screen grab above).

The changes have to do with this feature's typeface style and aspects of its animation, although it is doubtful that many casual viewers or laypersons will notice any difference between this new version and the one that preceded it.

One thing I learned from this story: Apparently, this “Breaking News” alert is known as a “stinger” in the parlance of TV news.

Since this story was about the technical details and flourishes of this new design, it did not delve into any other aspects of CNN's “Breaking News” philosophy such as the network's guidelines on so-called “breaking” news stories (if there are any guidelines).

For example, in today's hyper-driven news world, what constitutes “Breaking News” anyway? Nowadays, it seems to refer to any news, or even no news.

This two-word phrase -- along with its close relative, “News Alert” -- is so overused in the TV news business that it can be considered as one of the primary reasons why the credibility of TV news is in decline (something that has been ongoing for years).

Or to put it another way, when almost all news is labeled as “Breaking News” on the cable news channels (and increasingly at the top of local TV newscasts as well), even the most casual TV-news viewer can form the impression that the words are being applied merely to attract his or her attention and hold it, rather than alerting anyone to a news event or story of what one might call national importance.

Once news consumers realize they are being had with these blaring “Breaking News” banners, they can't help but become skeptical about the news.

Those of us of a certain age can remember the era when the all-news cable channels and hundreds of news Web sites did not exist and as a result, you didn't have this constant war for your time and attention.

Back then, a “Breaking News” alert really meant what it said. They were relatively rare, but that is why they were received by us as vitally important -- terrible news such as assassinations, assassination attempts, Space Shuttle disasters and the like.

Today, the TV news business would have us believe that there is a “Breaking News” story on par with these kinds of stories happening every minute and all the time.

This is ridiculous, of course, and yet the TV news industry surrounds every story with so much hype that news consumers today are now accepting that everything they see and hear on the news has the potential to rearrange their world.

The fact is that very few stories have that potential. Today, the TV news business -- and the society it serves -- is locked in a hype vortex from which there is increasingly no escape for those who feel they must stay informed but have nowhere to go except into the vortex.