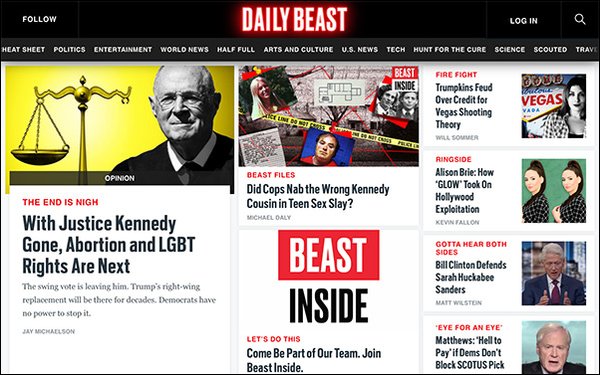 is launching a new paid subscription offering, Beast Inside, to give members early access to stories, exclusive series and newsletters.

Beast Inside will cost members $100 each year. Members who sign up early will get a 50% discount for the first year.

Beast Inside will “complement our growing ad business,” stated Heather Dietrick, CEO, The Daily Beast. The Beast is primarily ad-supported. The Daily Beast’s advertising business is “on track to more than double direct sales for the first half of the year compared to last,” she noted.

The IAC-owned company believes paid membership will grow to become a meaningful revenue stream for the company.

The Daily Beast now joins publishers like Bloomberg, Vanity Fair, Wired, Business Insider and The Atlantic, which have aunched paywalls or membership programs in the past year.
Beast Inside is also an opportunity to build a deeper relationship with loyal readers, who want more customization and audio content, as well as exclusive access to coverage.

To meet these demands, Beast Inside will provide members with a product called “Your Turn. It will give members a chance to share their opinions and insights and get published on The Beast’s homepage.  “A modern twist on Letter to the Editor,” according to the company.

An exclusive newsletter for members called “Rabbit Hole” will go deep on a popular story, while “First Look Friday” will give them early access to The Daily Beast’s top weekend stories before they go live to the public.

“Cheat Sheet Your Way” will let members customize The Beast’s Cheat Sheet newsletter, so that they can choose to get politics-free editions of the news, for example.

“Omnishambles” is a podcast exclusive to members, an inside look at Donald Trump’s White House. “The Beast Files” is a monthly true-crime series that gives readers the first chapter for free. Members will get exclusive access to the rest of the series.