As pollution remains an ever-increasing problem, global efforts are on the rise to reduce and eliminate single-use plastic products. Straws, in particular — which remain in widespread use in the U.S. — have been singled out with a handful of cities around the world banning them or proposing efforts to ban them in the near future. Campaigns such as “The Last Plastic Straw” and #StopSucking have gained momentum in the U.S. under the notion that giving up plastic straws are an easy sacrifice towards reducing waste.

A recent survey finds that 84% of U.S. adults use plastic straws at least some of the time. Usage among females is slightly higher than that of males, 88% to 79%. The younger demographic is most likely to use plastic straws, with usage ranging 85-90% among ages 18-54; that compares to 77% of 55-64-year-olds and dropping even further to 71% of those 65+. 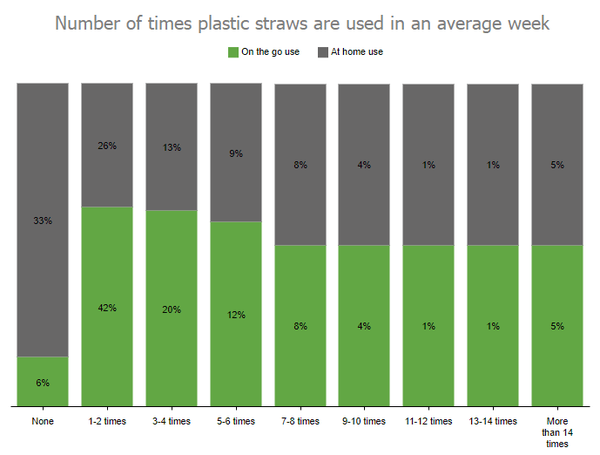 Among those surveyed, 63% believe that plastic straws can be recycled. However, while the type of plastic that most straws are made from is recyclable, because of their small size, most, if not all of recycling facilities do not have the capability to process and recycle them.

While the majority of respondents think that plastic straws can be recycled, this does not appear to have discouraged efforts towards reduced usage. Almost half (49%) of those who use plastic straws say they have taken measures to use them less frequently. Cutting back on overall straw use while at work/home and while on the go are the most common measures respondents have taken to use fewer plastic straws (44% and 38%, respectively). Thirty-five percent report using reusable straws and 24% order their beverages with no straw while dining out at least some of the time.

According to the survey findings, 73% of U.S adults feel that restaurant chains and other corporations should do their part by offering alternatives to plastic straws as well as incentives to patrons who bring in their own re-usable straw. Only 62% of respondents, however, say that they would choose an establishment that offered a plastic straw alternative or incentive over another that did not. Those in the Southern and Western regions are most likely to favor a restaurant offering plastic alternatives, with 65% and 66%, respectively reporting as such; compared to 54% of respondents in the Northeast and 61% in the Midwest.

When asked about other single-use items that should be phased out, plastic and Styrofoam to-go containers were mentioned most frequently, at 51%. Plastic to-go cups and lids came in second, with 38%, and tied for third at 34% are plastic forks and plastic knives.